The north side and northeast corner of this beautiful A-frame church had been showing signs of settlement for several years.

When the settlement began to affect the functionality of an exit door in the basement, an engineering firm was hired to design a repair plan.

St. Patricks Catholic Church is a well-known and well-established church in Kansas City, Missouri.   This church was built many years ago and has served the parish well.  However, in recent years the parishioners began to notice signs of foundation problems.  They began to notice what they believed were signs of foundation settlement along the north side and the northeast corner of their beautiful A-Frame church.   Eventually, the problems grew to become more significant and began to affect an exit door's functionality in the basement.  This was impacting the means of egress from the basement, and outside counsel needed to be sought.   The church's board decided they needed to bring in an engineer to investigate and determine a repair plan for the problem.

Thrasher Foundation Repair was recommended for this project by Bob D. Campbell Engineering, and was asked to assess the problem and develop a repair plan. We had also previously completed a project at a Catholic church in Garnett, KS and were highly recommended by them to St. Patrick’s parish.

The church board contracted with Bob D. Campbell Engineering, who became the Engineer of Record for this project.  The engineering firm performed an initial investigation of the property and the structural problems but soon asked Thrasher Foundation Repair to get involved in the project.

Thrasher Foundation Repair was called on-site to perform our inspection of the foundation.   Elevations on the foundation were taken and turned over to Thrasher's in-house engineer.

Thrasher Foundation Repair and the engineers from Bob D. Campbell Engineering then worked closely together to determine the foundation problems' full extent and the best repair options.

Multiple repair options were considered but eventually decided on a repair that included 36 resistance piers.   A variety of pier sizes and designs were used, including AP2-3500, AP2-4000, AP2-4500, and AP2UFVL-4000.  The varying live loads and dead loads throughout the affected were the cause for the multiple brackets and pier types and sizes used.  Once the repair plan had been finalized and approved, Thrasher Foundation Repair ordered the materials and began the installation.

During the installation, several factors came into play that made the installation more challenging, but Thrasher Foundation Repair was able to stay on time and budget.   Ultimately excavation depths around the foundation were more than 15' deep.

This was about double the standard excavation depth but was needed to expose the entirety of the foundation and footing.    Piers were then installed on the exterior of the church and the interior of the church.   Piers were spaced an average of 3' to 6' feet apart and were driven to an average installation depth of 42' below the footing.  This put the average depth of the piers at about 56' from grade.   This depth was significantly deeper than a typical project in Kansas City, MO, but it was the depth that was needed to bear the piers into bedrock.  Once all the piers were installed, the church's foundation was then lifted and put back into its original position.   The excavated soils were then backfilled to the original grade, and the site was seeded for new grass.

When working with Thrasher Foundation Repair, you are not just choosing to work with a foundation repair contractor, but you decide to work with a true partner.  We are committed to our customer's success. 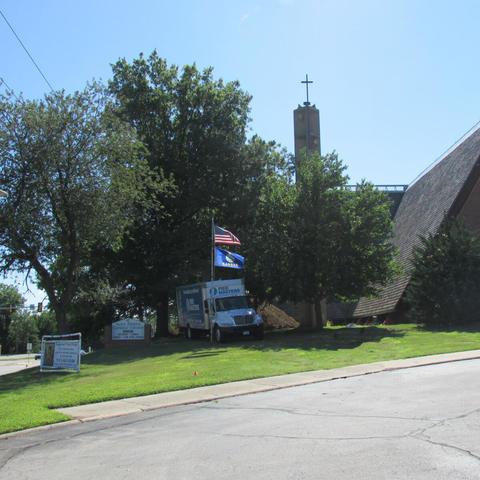 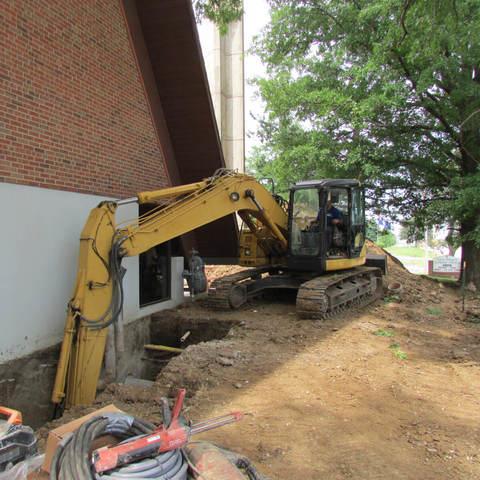 Excavating along the affected wall to prepare for the installation of resistance piers.