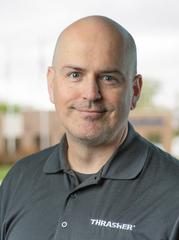 Robert is certified in designing solutions for our customers' concrete repair, waterproofing, wall support, settlement, egress window and crawlspace needs; and brings over 18 years of sales and service experience to the Thrasher team. Originally from Emporia, Kan., Robert now lives in Wichita with his wife and children. In his free time, he enjoys being with family, listening to music and hanging out with friends.

At Thrasher, we work every day to deliver a wow experience and challenge the status quo. One way we do that is by walking alongside the best in the industry. In Robert's words, "Thrasher has strong company values and is determined to provide the best customer service possible." We're thrilled to have Robert as a part of the Thrasher team as we work to redefine our industry.