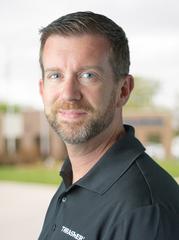 Sean brings to Thrasher experience in public and government relations. Prior to joining Thrasher, Sean worked as Communications Director for former congressman (now U.S. Secretary of State) Mike Pompeo. Originally from Overland Park, KS, Sean now lives in Wichita, KS. He has two daughters, one in college and the other in high school. He has a background in music and stays connected to it by singing with the Wichita Symphony Orchestra Chorus.

At Thrasher, we work every day to deliver a wow experience and challenge the status quo. One way we do that is by walking alongside the best in the industry. In Sean's words, "Integrity and reputation of the company was a draw. I'm excited to learn something new." We're thrilled to have Sean as a part of the Thrasher team as we work to redefine our industry.