Douglas and Kelly K. moved into their home in the early 2000’s. The previous homeowner had used Kansas Basement and Foundation Repair to stabilize the front wall of the home and install an egress window shortly before Douglas and Kelly moved in.

Just recently Douglas and Kelly began to think of some of the things that needed to be done around the house to preserve its value. Over the past year, Douglas had noticed that the back wall of their home where the laundry room was located had moved more over time. One evening while the couple was lying in their bed, they heard a loud crash. A previous attempt to repair the wall had failed and crashed to the floor! That is when Douglas knew something needed to be done.

Expert design for every home:

After some quick research, Douglas was able to link together that Kansas Basement and Foundation Repair was now branded under the name Thrasher. This connection brought with it strong brand recognition and Douglas had seen many of his neighbors use Thrasher’s services as well. With his neighbor’s best recommendations for Thrasher’s top-quality installation and professional experience, Douglas decided to call Thrasher to have them check the work previously done by Kansas Basement and Foundation Repair and check his other walls as well.

Thrasher’s Service Technician inspected the home, took measurements and pictures, and then sat down with Kelly. He learned Kelly’s reasons for wanting to protect their home and some of the concerns for the project. Douglas spends a lot of time traveling for work, so Kelly met with the Service Technician by herself. She mentioned that she had become worried about the safety of their home and that there was a chance that they may attempt to sell it in the future.

The Service Technician was expertly prepared for this opportunity. Kelly said that he was, “prompt and explained things very well.” Thrasher was able to diagnose the home and design an installation method appropriate for the family home. He was able to ensure them that Thrasher would be able to install Power Braces, excavate the wall that was damaged, and restore the wall near its original position. Kelly finally felt relief that she would now be able to save her home.

Installation day was here! Douglas stated that the crew did a great job protecting the home from any possible damage as soon as they arrived. He even said that “they said hi to my dogs when they came in and were very polite and professional!” The crew worked for a couple of days and Douglas said that they “kept him informed every step of the way.”

The crew was able to remove, or excavate, all the dirt along one side of their home. Then, from the inside of the house, the crew used multiple jacks to physically lift the first floor of the house. This practice must be done with extreme caution and care to help preserve the home as well as ensure the safety of the crew. Once the pressure from the wall that was caving in was released, the crew was able to straighten the wall and reinforce it to prevent it from coming back into the home. When it was all completed, Thrasher’s crew was able to achieve nearly five inches of movement to straighten the Douglas and Kelly’s basement wall back straight.

While this process can be stressful for any homeowner, Thrasher’s drive for top-notch customer experience ensured that Douglas and Kelly were brought into the process to follow along with the action steps that the crew was taking. Douglas specifically mentioned that he felt very well informed and was not surprised by anything that happened during the installation process.

The family is now able to sleep soundly knowing their home is protected from the soil around it. Gone are the days of worrying whether their home was safe. They can now sell the home if they would like and do so with confidence knowing the home will not only pass inspection, but they can pass the remainder of Thrasher’s 25-year warranty over to the next homeowner.

In closing, Douglas and Kelly knew something was wrong and knew that it had to be fixed and fixed right. They had taken another bid on their issue but felt comfortable with Thrasher because of how well they had been informed and the fact that their neighbors were happy with the results they received from Thrasher.

Whatever your reason is for deciding it is time to fix your home: increased property value, safety and peace of mind, or additional space, Thrasher's foundation repair experts' team has the experience, training, and high-quality products and services you need.

For more information on how Thrasher Foundation Repair can deliver exceptional results on your home improvement project, give us a call at 800-827-0702. 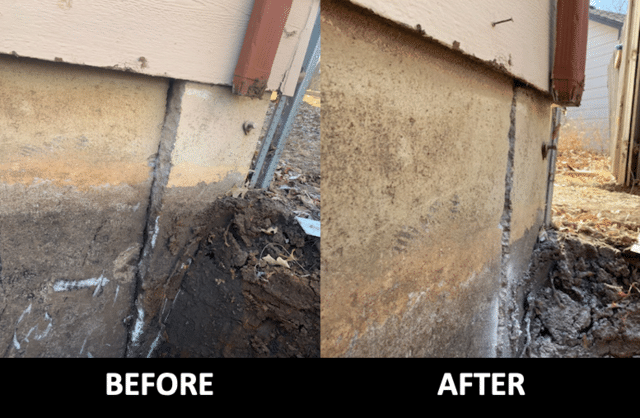 Before & after of the foundation 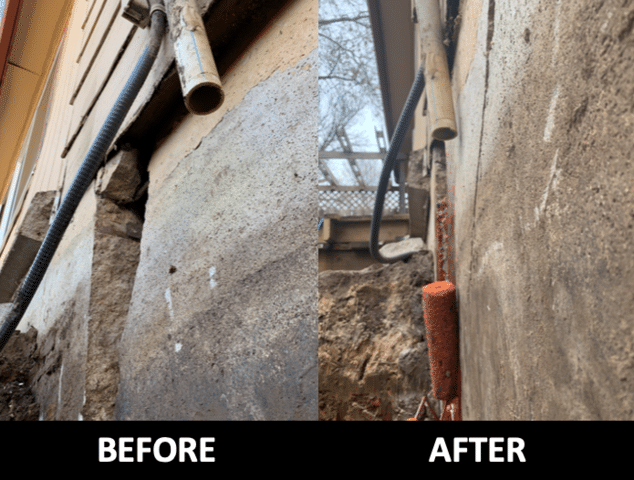 Before & after wall straightening 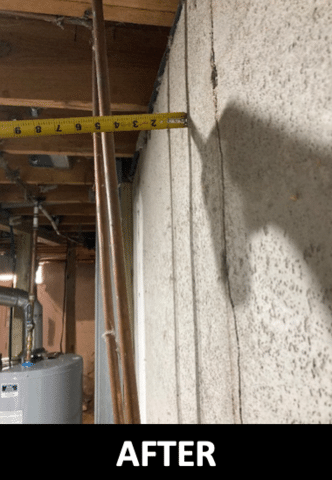