When it comes to steel beams, you probably think they are all the same.

If that's the case, you are in for a big surprise because all steel beams are not the same, especially when you are talking about supporting your foundation wall.

There are a few keys elements that you need to take into account when selecting the right steel beam and the right company to put them in.

The first thing would be the steel beam galvanized.  If the steel beam is not galvanized, it won't withstand the test of time and become structurally compromised. The elements such as moisture and weather changes begin to deteriorate and corrode the steel beam over time.  That is the exact reason that here at Thrasher, we only utilized galvanized steel beams. It's the sure-fire best way to ensure the solution that we are providing you for your foundation wall issues are a permanent solution and not something you will have to redo time and time again.

The second thing to consider when it comes to steel beams is how they will be attached to the floor joist and the concrete basement floor.  In my time, I have seen many different approaches to securing the steel beam.  The challenge is that not all of them can provide the proper support necessary to prevent further inward foundation movement.  One example I have seen in the floor joist capacity is putting in a 2x4 board to hold the top of the beam in place.  That will surely keep it in place temporarily, but the pressure applied to the wall over time will compromise that 2x4 and allow the steel beam to move or, even worse, fall over entirely.  As you can imagine, that is not a permanent solution and will not allow you as the homeowner to achieve the peace of mind that your foundation wall is permanently stabilized.  Now let's discuss an example of how a steel beam can be secured to the concrete basement floor slab.  Typically, the slab will be broken out, and the steel beam will be placed directly on top of your footing, which can work if it is securely fastened to the footing.  Unfortunately, that is not usually the case. What tends to happen is the freshly replaced concrete around the steel beam is the only thing keeping that beam from being forced in by the wall.

As I mentioned, those are just a few things that I have seen in my years of doing this.  Now let's discuss a couple of different ways that we here at Thrasher secure our steel beams to give you that permanent solution that we're so confident will work we put a 25-year warranty on it.

Let's get started with how we secure our galvanized steel beams to the floor joist.

We have four different types of brackets that are specifically manufactured to be utilized in the stabilization of failing foundation walls.  One is our bridge bracket used when the floor joists are perpendicular to the wall; another would be our lever bracket, which is utilized when the floor joists are parallel to the wall.  The lever bracket is paired with a galvanized steel runner and joist reinforcement to ensure we have the proper amount of support to stabilize your failing foundation wall permanently.  The other 2 are specific brackets utilized in particular scenarios.  One is the concrete bracket, used in rooms like a stoop gap room or a room under a garage where the ceiling in the area is made of concrete instead of wood.  We tend to utilize the final bracket in older homes, typically those built 100+ years ago, and it's our alternate wood bracket.  It is used in scenarios when floor joists' width is too narrow to utilize our bridge bracket and inconsistent, ultimately requiring a custom bracket for each application.

Now let's discuss how Thrasher would protect the bottom portion of your steel beam and make sure that it's properly supported and can withstand the test of time.

We offer three different brackets for the floor.  One is an angle bracket secured to the basement concrete slab with 4-inch lag bolts. Another way is our patented Powerguard bracket.  That is a galvanized bracket specifically manufactured to be utilized in scenarios where a Thrasher basement waterproofing system is already in place or when a waterproofing system is to be put in after our steel beams have already been put in a home.  The Powerguard bracket is secured below the basement concrete slab and attached directly to the footing, and then the steel beam is attached to the bracket.  The last bracket we utilize to stabilize our steel beams on the floor is what we call a long bracket. This is a more extended angle bracket that we employ in scenarios where the home has an existing interior drain tile that the homeowner doesn't want to disrupt.

So, as you can see, we've thought of it all and are set up for success when it comes to helping you permanently stabilize your foundation with steel beams.

Now that you understand how all steel beams aren't the same and sure aren't designed to support your failing foundation wall, I am confident you'll make the best choice and utilize the Thrasher steel beam to protect your most significant investment. 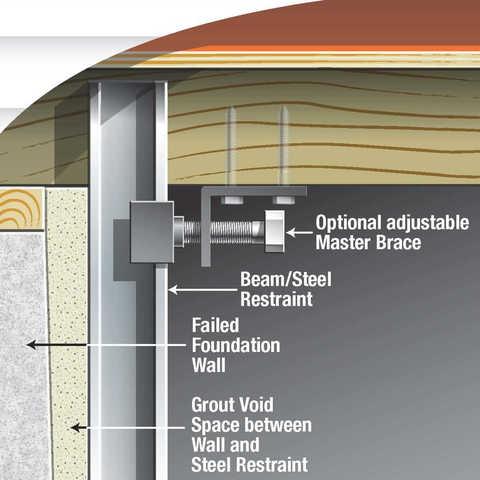 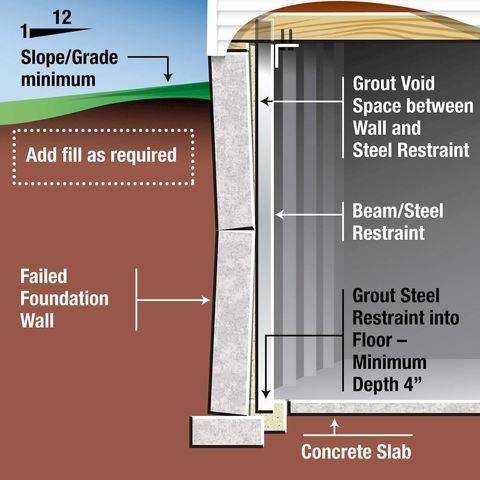