Garage floor cracks and a leaning chimney can indicate a significant foundation problem. Thrasher Foundation Repair gets to the root of the issue and provides long-lasting protection with reliable street creep and chimney repair solutions.

Have you noticed your garage floor slab pulling away from the wall? Is there garage floor or foundation wall cracks? Is your chimney or smokestack tilting or separating from your home? These are all signs of serious foundation problems. Whether dealing with street creep or a leaning chimney, Thrasher Foundation Repair can diagnose and eliminate these common foundation problems and preserve your home's structural integrity and safety.

Contact us at 1-844-948-3306 or complete the form below to learn more about our street creep and chimney repair services. We offer free, no-obligation foundation repair estimates in Omaha, Lincoln, Sioux City, and throughout Nebraska, Western Iowa, Central and Western Kansas, and Northwestern Missouri.

Your foundation is one of the most important elements of your home. Ensuring it's in tip-top condition is a must. Unfortunately, changing soil conditions, fluctuating temperatures, and other environmental factors can leave your foundation vulnerable. Two common foundation problems that homeowners face are street creep and leaning chimneys.

Like many materials, concrete expands when it's hot and contracts when it's cold. This cycle puts stress on concrete surfaces, which can cause them to crack and shift over time. Contractors place expansion joints in sidewalks, driveways, and other concrete slabs to allow them to expand and contract independently and reduce cracking.

While expansion joints mitigate damage caused by the expansion process, they can begin to deteriorate or become filled with materials like sand and gravel that prevent them from doing their job. As a result, the concrete will expand as a single unit, and the street will begin to "creep." Street creep exerts tremendous pressure at the edge of the concrete where the driveway meets a garage slab or foundation wall.

Street creep can cause significant foundation damage, but it's a slow process. A typical block-length street generally shifts a fraction of an inch per year. However, that movement eventually adds up to several inches and has the potential to lead to serious foundation problems.

Our Solution to Street Creep

A tilting chimney can be a scary sight for homeowners. In addition to being dangerous, a leaning chimney is often a symptom of a much larger foundation problem. Chimney damage is a common sign that the foundation soils cannot support the weight of your home, which causes the foundation to sink or settle. Without the proper support, your chimney may begin to separate or tilt away from the house. Ignoring the warning signs of a tilting chimney can have disastrous results. It may fail and eventually fall without repair, further damaging your home and foundation.

Signs of a Leaning Chimney:

If there's a noticeable gap between your home and the chimney, filling it with caulk or mortar might seem like the obvious solution. However, this method is merely a temporary fix and can lead to more foundation problems over time. Properly repairing a tilting chimney means addressing the underlying issue. Thrasher Foundation Repair's chimney repair services get to the root of the problem, stabilizing your tilting chimney and restoring the structural integrity of your foundation.

Since the problem typically begins with the footing and foundation, similar solutions used to repair bowing walls can be applied to leaning chimney repair. Our proven methods support your chimney in various ways, from attaching consistent weight or pressure to reaching load-bearing soil. Helical piers, braces, and hydraulic jacks are all practical solutions to keep your chimney upright and aligned with your home.

If you're experiencing street creep damage, have a leaning chimney, or are dealing with other foundation problems, don't wait to take action. These problems can worsen over time, compromising your home's safety, integrity, and value. Thrasher Foundation Repair has the experience and expertise to accurately diagnose the problem and provide fast, effective, and long-lasting solutions.

To learn more about our foundation repair services, give us a call at 1-844-948-3306 or contact us online. We offer free estimates to homeowners throughout Nebraska, Western Iowa, Central and Western Kansas, and Northwestern Missouri, including Lincoln, Omaha, Sioux City, Council Bluffs, Bellevue, Grand Island, Kearney, Norfolk, Fremont, North Platte, and nearby. 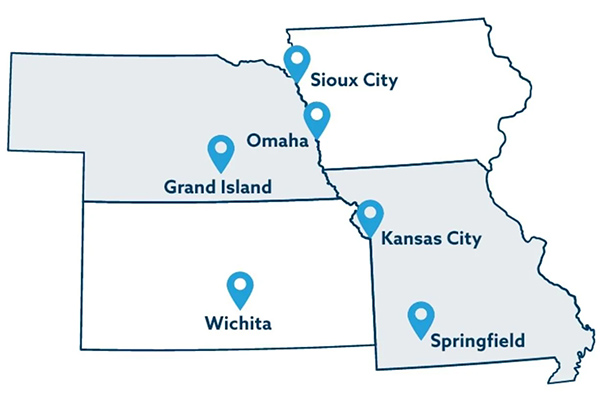