A local homeowner in Aurora, MO noticed that they had a sagging floor in their home after living there for a few years. As the years has passed, they noticed that the problem had become noticeably worse and it raised some real concerns. Ultimately, the homeowner wanted to fix the problem before it got worse and became too far gone, so he chose to call us for an inspection.

System Design Specialist Nick Tiberghien was sent to the scene to evaluate the potential causes on this problem. He determined that the homeowner's significant sag in the floor was caused by a large gap between the baseboard and the floor. The cooler air could be felt in the crawl space from the rising vapor and humidity levels. The reason the floor was sagging came down to the lack of support underneath it. The humidity and vapor levels within the crawl space had caused the floor's support beams to weaken and bend.

The homeowner was concerned about the structural integrity of his home after hearing about these problems, because he did not know if this problem could be solved. With these concerns, the homeowner chose to have us fix their problem because of our thorough inspection and explanation of the problem in addition to a comprehensive solution that would prevent future problems.

The solution to this crawl space problem began with giving the floors a new support system that would raise them back up. A few different products were used to achieve this including 12-foot support beams with a Smart Jack System to stabilize the floors. These Smart Jacks also lifted the sagging floors back to their original level. Next, a Clean Space Vapor Barrier was installed with a Smart Sump to control to soil moisture, reduce the high relative humidity, and to redirect any water intrusion. This comprehensive solution included solving the sagging floors issue, addressing any future issues of high relative humidity in the crawl space, and water intrusion such as the one that happened during the measurement process of this installation.

This solution improved the homeowners quality of life and reassured them that they could stay in their forever home. The homeowner was shocked that there were solutions implemented not only to solve their expressed problem, but also their surprise issue and prevent any further issues. There is relief for the homeowners because they have level floors and they know that the issues have been addressed. 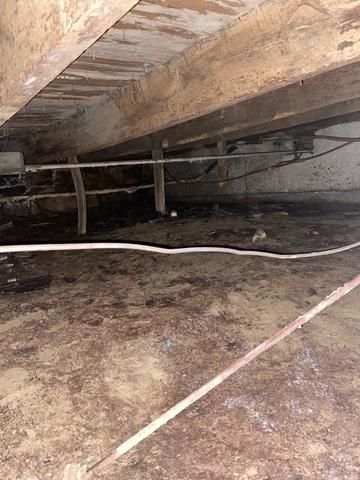 The crawl space had very high humidity. The humidity caused the support posts to weaken and bend, offering little support for the support beam. 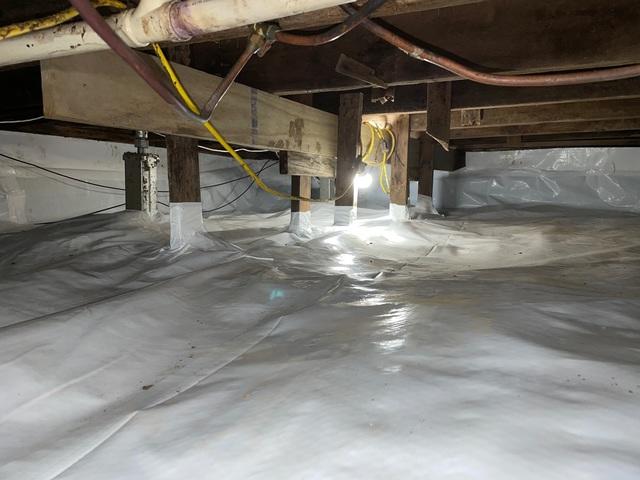