New pressure-grouted micro-piles installed, including the use of 13-cubic yards of material.

This homeowner in Kansas City was referred to Thrasher Foundation Repair by one of our former customers.  The homeowner contacted Thrasher about a gap developing between the baseboard and the basement concrete floor in their lower level bathroom. The customer was also beginning to notice a slope in their concrete floor and cracks in the drywall on the floor above this room.

The affected area of the home was built several feet above original grade, and as a result, the basement floor had to be elevated on non-native soils.

The nature of the connection between the slab floor and concrete piers ruled out mudjacking as a possible solution, and the presence of rocks in the fill material ruled out helical piers. After also determining that there was limited workspace and discovering voids under the floor, we recommended installing new pressure-grouted micro-piles.

Before construction, a rocky fill soil was brought in to increase the elevation and create a substructure for the basement floor to be poured on.  At the time of inspection, the homeowner produced original construction details for the structure.  The construction details showed that the floor was designed to be a structural slab supported on several interior concrete piers with structural columns and I-Beams above supporting the 2nd floor.  It was evident by the home's design that the fill soil was not intended to support the concrete floor, but instead that the concrete floor would be structural and supported by several concrete piers.

While the interior columns' settlement was not unique, the structural basement floor is connected to concrete piers overfill soil did create several design challenges.  Because the concrete floor was connected to the now settled concrete piers, we could not merely mud jack or lift the basement floor.   Also, because a rocky fill soil was directly beneath the basement floor, we could not install helical pier nor push piers.   Neither of those pier systems would be able to advance through the very rocky fill soil.  Lastly, we determined a sizable void below the existing structural basement floor that was at risk of collapsing.   All of these challenges had to be accounted for when designing the repair for this home.

Ultimately Thrasher Foundation Repair determined the best repair option for this home was to install pressure-grouted micro-piles and then fill the existing voids below the slab with a concrete slurry.

The foundation repair process began by shoring up the ceiling structure above the failing columns.  Once the main floor was stabilized, and secure Thrasher began removing drywall and exposing the original steel columns.  The steel columns were then removed, so removal of the concrete floor could begin.  The concrete floor over the piers was carefully chipped away, taking extra precaution to leave the rebar intact while removing the concrete to expose the soil.  Because the basement floor was structural, the design engineer required us to keep all original rebar intact.

A portable TEI rock drill was then brought into the home to drill through the center of the existing concrete piers and into sustainable bedrock. The drill bit was advanced through the rock and soil and into bedrock.  At that point, the sacrificial bit was left in place, and high-pressure Neat Cement was pumped through the hollow drill bit and created a grout column around the sacrificial drill rod.  This newly installed grout column could now serve as the structural support for the concrete basement slab floor.

After the new piers and columns were installed, the voids under the slab were filled with low-pressure grout, creating a stable floor.  Filling all the gaps below the concrete floor and lifting the floor to the desired elevation used an astonishing 13 cubic yards of grout material to complete.  The previously removed section of the floor was then poured back, and the columns and I-Beams in the ceiling were placed back in their original position.  The columns and I-Beams were now resting solidly on the grouted micro-piles, which were drilled into the earth's bedrock.  The structural basement floor was restored to the original elevation without compromising the concrete floor's structural strength.  All construction debris was cleaned up, and the home was restored to its original condition and turned over to the homeowner.

While this project posed several unique challenges to being repaired, through Thrasher's expert experience and vast repair options, we were able to put this home back on a solid foundation. 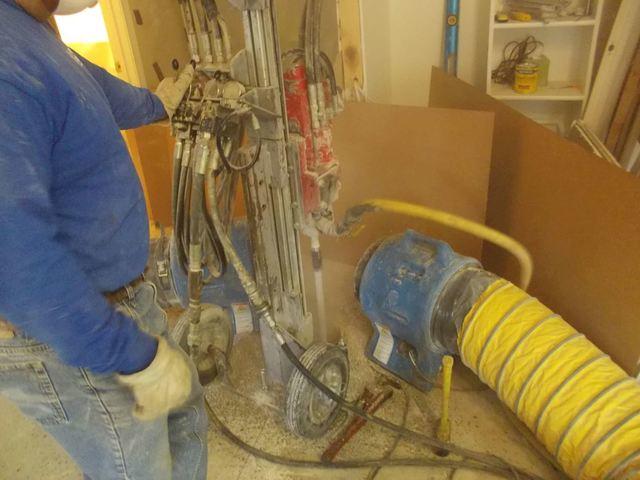 Portable drill rig is used to drill through existing pier into sustainable bedrock. 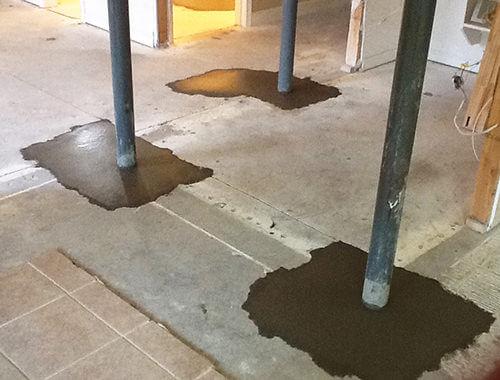 New columns and piers have been installed