Foundation Repair Case Studies: PolyJacking was the Solution for Filling a Large Void

A broken water main washed out the soil underneath an area of the foundation of this industrial facility on Front Street in Kansas City.

At Thrasher, we formulate our own materials with a composition specifically designed to provide long-term stability.

The city of Kansas City experienced a water main break due to frozen water pipes. Because of the volume of water and the water pressure, a significant amount of soil was washed away in the water main break area. The water main break was close to an industrial facility, and the owner of the facility was concerned that the void could cause foundation issues to their building. As a result, the facility owner hired a structural engineer to assess the problem. After his inspection, the engineer concluded that there was no structural issue, but the excessive water had created a void underneath the slab floor that needed to be filled. Without filling the gap, the structural engineer was concerned that the concrete slab could settle, resulting in damage to the building. The engineer recommended either a mix of cement and topsoil (mudjacking) or polyurethane foam to fill the void.

The customer was thrilled with the efficiency and professionalism of the crew and glad he didn’t call anyone else.

The structural engineer recommended that the building owner contact Thrasher Commercial to access the issue and recommend the repair.

The structural engineer had worked with Thrasher Commercial in the past and was impressed with the experience and was confident that Thrasher Commercial would provide the appropriate solution and a good customer experience. After working with the System Design Specialist, the customer selected polyurethane foam to fill the void. The main reason the customer felt like the polyurethane foam was the best solution over mudjacking was that polyurethane is more lightweight than mudjacking because mudjacking uses cement and dirt, which are heavy.

Polyurethane foam is a newer solution that was developed due to all the issues with mudjacking.

A challenge with the project was that the business owner, who was also the building owner, wanted the repair done quickly to ensure that damage was not done to the concrete slab. The factory's equipment also sat on the concrete slab, and they didn't want to lose a day of productivity to the business. Not only were the materials on the line but also the hours that were important to his employees.

The equipment that rested on the concrete slab was costly equipment that needed to be level to function correctly. Also, access to the work area would be a challenge because the concrete repair equipment would need to be parked on the street outside the building and the main entrance the production crew would have is through a window.

The city of Kansas City was also grateful for quick and timely repair.

The area of the building's foundation affected by the water main break. 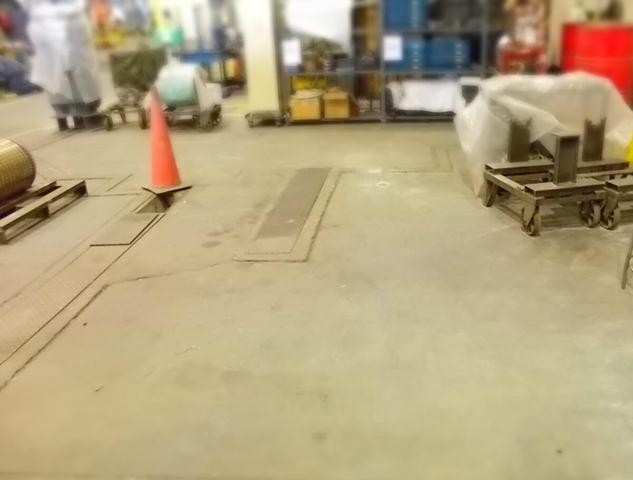 Part of the factory's slab floor that needed to be mudjacked to fill the void caused by the water main break.