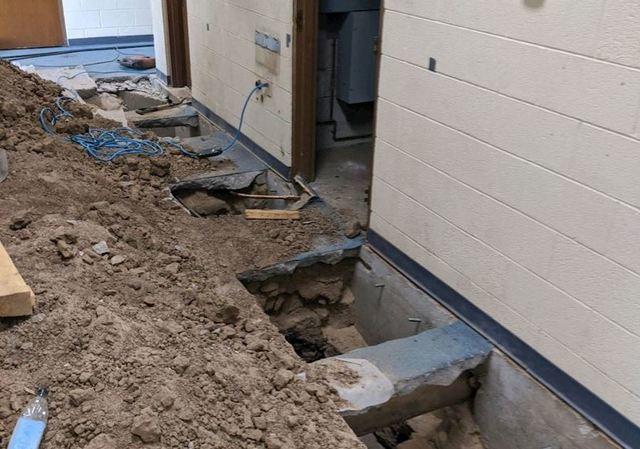 Central Christian College (CCC) is a private evangelical Christian college in McPherson, KS. It has been in service to the community since the early 1900s. They recently reached out to Thrasher Commercial to solve differential settlement in a student classroom facility building constructed in the 1970s.

The differential settlement showed up in the center of the building in an area where the utility and bathrooms are located. This area of the building was constructed with poured footings and stem walls with concrete block walls going to the roof of the building. The block walls were built to construct a women's and men's restroom with an HVAC utility room dividing the two bathrooms. The HVAC system was an under the floor slab design with concrete tunnels used for air delivery instead of traditional ductwork. Because of this unique HVAC system, the air had been drawn in and under the slab since the construction of the building. Decades of air moving across the earth beneath the building served to "super-dry" the clay-based soil, which resulted in severe compaction, soil shrinkage and wall and slab settlement. It was as if the building had been experiencing a 50-year drought - a prolonged dry period that caused the soil to dry out.

As the clay dries out, it shrinks. Soil shrinkage beneath a foundation has the same effect as soil settlement: it usually causes a section of the foundation to crack and settle into the void or hollow area where settlement has occurred. In this case, it caused cracks in the foundation walls, and the doors and windows were out of alignment and did not function properly. The only way to save this building was the footings and slab needed to be supported immediately to stop further settlement and permanent damage to the structure.

Due to this type of construction of the building and the affected area that was settling, there were limitations on what kind of solution would fix the problem. Vibration or loading of the foundation was not an option.

The other challenge was the lack of moisture in the soil and its resulting hardness. Thrasher Commercial Production Manager Brent Foreman described it, "As hard as a rock. It was so hard and unforgiving that we had to devise a method to get the helices to engage the downforce or 'bite' into the soil."

Thrasher and its engineering team designed retrofit helicals to support and lift the foundation walls and PolyLevel to lift and stabilize the slab floor. It would require ten helical piles and approximately 650 lbs. of PolyLevel to support the structure.

There was no room to get any installation equipment inside the building, so the Thrasher crew utilized hand-held helical equipment to install the piers. Three-foot by three-foot sections of concrete was removed at each helical location, and the soil was hand excavated down to the bottom of the footing. Some of the ground literally needed to be broken out and hauled up in chunks. The helicals were then installed to a depth of an average of ten feet. Underpinning brackets were attached to the helicals and placed under the existing footings, and the piers were put into service. Once all the piers were installed, hydraulic lift cylinders were attached to each pier. The foundation was lifted and stabilized. It started by being a "good lift" with nearly a one-inch boost. After conferring with the client, they decided to get the most without causing new damage and ended up with a three-inch lift. It was a great outcome as doors and windows squared up, and cracks were closed.

The excavated soil was compaction backfilled, and the access holes were rebar reinforced, and the crew replaced the concrete. Once the concrete cured, the PolyLevel was injected under the floor slab to void fill and lift any areas that were down.

PolyLevel is lightweight and only weighs approximately 4 pounds per cubic foot adding almost no additional load to supporting soils. Its high capacity lift action is a result of the expansion of the foam, allowing for much larger loads. The capability for an accurate lift is due to a calculated reaction time of the polyurethane foam allows for precise lifting. Plus, it's waterproof and can be used to under-seal the slab and stop other infrastructure leaks. Finally, PolyLevel's quick cure time allows for even heavy traffic, just 15 minutes after completion of the injection of the material.

The Central Christian College project took six working days to complete utilizing a four-person crew. Thrasher Project Manager Tobias Conrady said, "In the end, we had a '100% delighted' customer." He added, "It started by educating the customer on the front end and setting reasonable expectations. And by continuing to update the client, we were able to deliver on the promise and the engineering. We were able to give CCC a satisfactory outcome, maintaining our schedule and their budget."

Foreman added, "We overcame some difficult circumstances through grit and experience, and we were still able to deliver our promised outcome, on-budget and time."