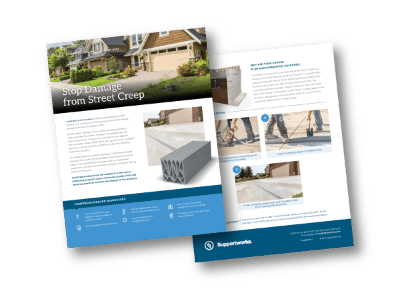 It is a little-known fact, but concrete is not only impacted by freeze-thaw cycles, but is also impacted by seasonal temperature changes. Concrete slabs actually shrink as temperatures drop and expand as temperatures warm up. This means that the concrete under our feet and under our vehicles is constantly shifting in size and volume. Our driveways and the very roads we drive on are shrinking in the colder months and expanding in the warmer months. It is for this reason that the building code requires contraction and expansion joints to be installed in concrete slabs. If properly installed and maintained, these joints create space for the slabs of concrete to move and expand into. However, if the contraction and expansion joints are not properly installed and maintained it can lead to a phenomenon knows as Streep Creep.

Streep Creep, also known as street elongation, refers to the lengthening of a roadway or paved concrete surface over time. The concrete roadway grows as a result of debris filling expansion joints in the winter months while the concrete has shrunk. When the concrete expands in the warmer months it has no open space to expand into and instead grows the length of the overall roadway. Streep Creep is a very slow but consistent process. It is estimated that a typical roadway will grow a fraction of an inch per 1 city block length of road every year. While the movement is very slow and small, the compounding effect of miles of roads over years of time, can have a dramatic impact. It can cause road ways to buckle under the extreme pressure and can even impact building structures in the path of the street elongation. If the street creep or elongations is pushing against your driveway, it can cause major damage to your driveway, garage, and home.

When Thrasher installs CompressionGuard, a 3-inch-wide expansion joint is created. The concrete in the joint is cut and completely removed. The CompressionGuard is then pressure fit into the opening and left flush with the surface of the concrete. The finished product looks aesthetically pleasing, is maintenance free, and creates a wide range of motion for your concrete to move in through the seasonal changes.

It is clear to see that CompressionGuard is the right solution to isolate your home from damaging street creep forces, and Thrasher has the experience needed to install the product the right way.