What is a Wing Wall?

Wing walls are similar to retaining walls connected to homes, bridges, and other structures and act as a retaining wall to facilitate a quick transition in grade elevation.

Wing walls extend from an existing structural foundation wall and act as a large retaining wall.

Regardless of the application, wing walls play a significant role in the integrity of the structure and the use of the land around it. Sloping sites often incorporate wing walls into their building foundations. The wing walls are built as extensions of the building foundation on the downhill side of the structure. They hold back the soil to create an open lawn area outside a walkout basement providing additional green space and yard to a home or building.

Reinforced poured concrete is typically the material of choice for wing walls. For these types of wing walls, well-engineered steel reinforcement, good drainage, and robust footings are crucial construction details for the wall's success.

Other common materials used for wing walls can be brick and mortar, Concrete Masonry Units (block walls), and occasionally railroad ties or other landscaping blocks. For these types of construction, drainage and vertical reinforcement are critical to these walls' long-term stability.

If not appropriately done, these walls will fail and will often fail faster than they should.

Causes and Signs of Failure 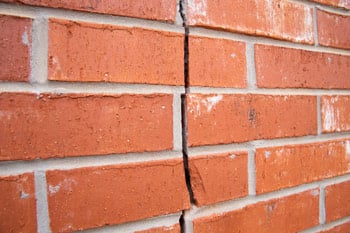 Cracked walls are a typical sign of a failing wing wall.

Failure of wing walls is typically the result of improper footing, improper top side drainage, or failed vertical support.

Regardless of the cause, once a wing wall begins to fail, it will move rapidly and display progressively worse signs of failure until it eventually reaches total wall failure.

The signs you will see as a wall begins to fail will be cracking in the wall. You will either see these along the mortar joints or in diagonal or vertical cracks on poured walls. Shortly after observing wall cracks emerge, the wall will begin to lean, tip, or bow away from the side of the wall with soil against it. As time progresses, the wall will go from a slight bend/lean with minor cracking to a significant bend/lean and considerable cracking.

Blocks and bricks will eventually begin to break free from the wall. Ultimately, the wall will reach total collapse. In the case of a settling wing wall, you will not see a leaning wall, but instead, a wall that appears to be settling into the ground. 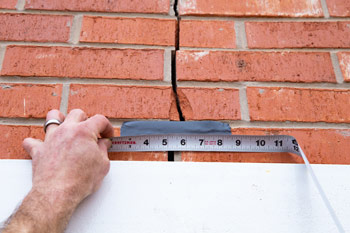 The repair of a wing wall is an important step to avoid unsightly wall cracks in your home.

Once a wall begins to fail by either bowing/leaning or settling, it must be repaired. These wing walls obtain their structural strength through a connection with the home's foundation. So if these problems are ignored, not only will the wing wall be damaged, but you will likely damage the structure of the house and cause more significant issues.

No matter what type of damage your wing wall has undergone, an experienced foundation repair contractor should complete the repair. Rather than demolish and rebuild the wall, a foundation repair contractor will be able to complete a more affordable, permanent repair by driving steel anchors through tilting wall sections and into the soil. Improved drainage, other site work, and this excellent engineered solution will usually restore a wing wall. This eliminates the need for more expensive demolition and reconstruction work by permanently solving the problem.

At Thrasher, we have solutions for settling and sinking wing walls. To help you decide if our solutions are right for you, we offer free wing wall repair inspections throughout our Nebraska, Iowa, Missouri and Kansas service areas. To schedule an appointment, contact Thrasher by phone or email today!