How to Repair Foundation Problems Caused by Street Creep 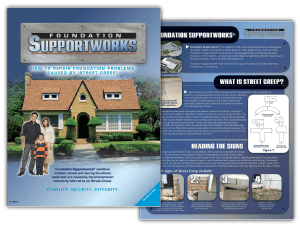 There are only two guarantees when it comes to concrete; it will get hard, and it will crack.

There are a few key signs that you may be suffering from damage caused by street creep. One of those is tightly compressed expansion joints. Typically, expansion joints are located between your driveway and your garage slab, your sidewalk and driveway slabs. If there is no separation between the slabs in those areas, that is a crucial indicator. You may have street creep. A second thing to look for would be damage to the wing walls.

The last thing that we tend to look at is the alignment of the slabs in your driveway. When your driveway was finished, they ran a tool across your whole driveway and created things called control joints. Those control joints are there to control the pattern of cracking that happens with concrete. A control joint aims to prevent the concrete slab from breaking down the middle and instead crack in those joints. Those joints, when they were initially put in, were installed in a straight line. If you look at your driveway and those joints are no longer lined up, that can be a good indication that you are suffering from street creep.

All concrete expands and contracts as a result of changing temperature levels. Most newly constructed homes have a construction-grade material; usually, fiberboard is placed in the expansion joint near the garage floor, and the street meets the driveway. While this is common, it offers little to no protection from concrete expansion. The material is also very susceptible to damage from water, weather changes, and sunlight; it quickly dries, cracks, and shrinks. At that point, solid materials like pebbles, debris and dirt fill the space. Many of these materials will not compress, so the expansion pressure is not absorbed by the debris when the concrete expands with warmer temperatures. Instead, it's transferred to the next slab or structure. These forces are significant over time. They can result in broken concrete, damaged garage walls and can even severely impact a home's foundation walls. Openings also allow water to seep under concrete slabs weakening the ground beneath it, leading to void-formation and sinking concrete.

How do we stop the relentless forces from street expansion? "Street Creep." To prevent damage to concrete slabs from expansion and "Street Creep," Compression Guard is the most advanced solution available. It provides superior protection, stopping the damage from expansion of concrete streets and driveways, giving them a higher protection level from substantial expansion pressure. CompressionGuard's unique design both expands and contracts. This allows ample room to compensate for years of concrete expansion during the summer months. It also prevents materials like gravel, sand and other debris from entering the joint when the concrete contracts in the winter. CompressionGuard is a must when restoring your driveway. It will help the life of your driveway while preventing future issues with your home's foundation.

If your home has already started to see some of the signs mentioned above, it's not too late. We can still help you. We will install out CompressionGuard, a proper expansion joint to reduce the forces being applied to your foundation and install one of our patented foundation wall support solutions to stabilize your foundation walls permanently.

Once both of those things are installed, you can rest peacefully knowing that the continued damages from street creep will no longer be an issue.

Street creep is caused by thermal expansion and contraction that can ruin the pavement surrounding your home. Learn more about how we solve this issue.