Some homeowners across the state of Nebraska and Western Iowa are experiencing precisely that with the lack of moisture we have experienced in the area since last summer. 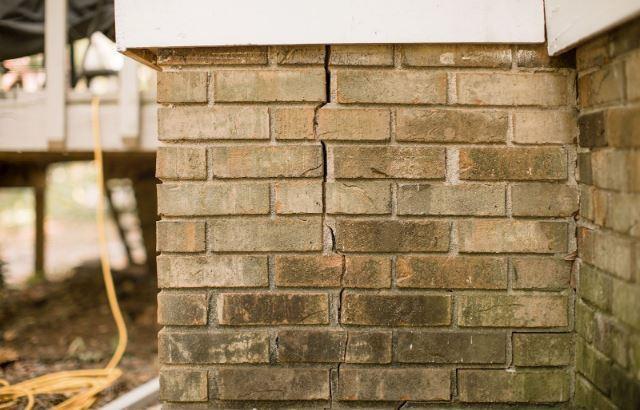 With the recent drought, these problems seem to be happening suddenly and only get worse with time. We have had several homeowners who have said in the last few weeks all of a sudden, they heard a "popping" type noise, doors, windows are not opening, and cracks in foundation walls, drywall, and exterior finishes are appearing. The following is a more detailed explanation of how to spot damage caused by foundation settlement:

One of the most obvious signs that you've got a problem with foundation sinking or settling is finding noticeable cracks in your foundation walls. However, not all foundation wall cracks are bad - some are, in fact, normal. So how do you tell the difference? Location, direction and size are all factors.

Shrinkage cracks in poured concrete foundations are normal. They happen while the concrete cures within the first year after construction, generally do not change over time, and are mostly harmless. However, when cracks appear years after your home is built or grow longer or wider over time, it usually means something is moving, i.e., foundation settlement.

Foundation wall cracks that are wider at the top than at the bottom can indicate that part of the foundation is falling away from the rest. If you notice this problem, it's best not to fill the cracks with anything until you determine if the foundation needs to be stabilized. Sealing the cracks may prevent a contractor from being able to lift the foundation back into place.

Another thing to keep in mind: some foundations that are moving or sinking have one large crack, while others have many small cracks. If you see many small cracks, imagine how large the gap would be if all of those small gaps were put together.

Crack In Walls Or Above Windows And Door Frames

Drywall and plaster cracks are relatively easy to patch, but what causes them in the first place? It could be excess moisture or a poor mud and tape job, but it could also mean that your home has foundation problems. If foundation settlement is the cause, you will usually see the cracks re-open after they've been repaired. How do you know which types of cracks are a real problem? Several vital indicators mean you should take action.

How can you tell if wall cracks are caused by foundation settlement?

Drywall cracks that occur around the corners of windows and doors - on any floor of your home - are often due to foundation movement. If you see a crack of this nature, it is best to have the foundation inspected by a professional. If you set a level on the window frame and it is un-level, this can be a sign of foundation settlement.

If a crack has been repaired once before and has opened again, it is likely a sign that the foundation is shifting or settling. If you are not the original owner of the home, take a close look at the area around the crack to determine if it has been patched in the past. Often you will see a rougher finish or small hump in the area where the crack was once repaired.

Another thing to watch for when it comes to drywall: nail pops. Nail pops occur when the drywall shows damage where nails or screws were placed. If the drywall shifts, the drywall mud that covers the screw will sometimes pop off. This may be a sign of foundation settlement, especially if you see more than one.

Sticking doors and windows are more common in older houses than new ones. Sometimes, it may be a moisture issue caused by high humidity or a window system's internal parts being worn out. On the other hand, it could be a sinking or settling foundation that is causing the door or window to fall out of square.

How do you know if sticking doors or windows are a sign of foundation settlement?

One way to determine if a foundation settlement issue caused your sticking doors or windows is to place a four-foot level on the top of the window or door frame. If it's not level, it's a good idea to have the foundation inspected by a professional. If it is level, you may have a different problem with the window or door itself.

For really old windows that stick, you might have them looked at by a window contractor. If the problem is seasonal, it could indicate that the problem is moisture-related since increased moisture levels in the wood will cause it to expand.

When it comes to doors, if you're not the original homeowner, run your hand across the top of the door to see if it has been shaved down before. The wood will feel rougher if it has been shaved. If it was shaved to fit once before and is now rubbing again, it's likely that your home foundation is shifting or settling.

The floors in your home are made of wood on the upper levels and concrete in the basement. An uneven floor on any level of your home can be cause for concern.

If the basement concrete floors aren't level, it is usually caused by foundation settlement or heave. In either case, you should have it looked at by a pro because those types of problems will usually get worse over time.

If the wood floors of the upper levels are out of level, it could be caused by a couple of different issues. It could be the foundation settling or interior columns in the basement, or crawlspace shifting. Another potential problem could be sagging floor joists, which are especially common in homes with a dirt crawlspace.

With the lack of moisture, the clay soil is shrinking. This is no different than if you took a bucket full of dirt and sat it outside for several days without watering it. You can see large cracks in the soil at the surface, and the ground is no longer hugging tight to the foundation. The same thing that is happening at the surface is happening underneath your foundation footings, which support the home's weight. Once there is a gap under the footing due to the soil shrinkage, the footing settles into that gap causing damage to your home.

If you are concerned that your home has experienced foundation settlement, complete this form for a free inspection and assessment from one of our highly trained and experienced System Design Specialists.