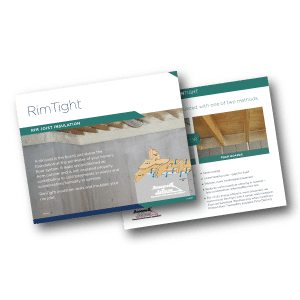 Rim joist cavities in our homes are the most commonly overlooked energy culprit in our home.

Each year homeowners waste hundreds and even thousands of dollars on energy inefficiencies within their homes. One of the biggest energy culprits is the heat loss that occurs at the Rim Joist location of your home. A study performed by HandiFoam in 2007 found that sealing up the rim joists in a home in Kansas with HandiFoam, reduced annual air infiltration by 11.4%. This reduction in air infiltration translated to an estimated annual reduction of 19.3% in heating and air-cooling costs of the home.

To better understand what causes this amount of energy and heat loss, we must first understand what the rim joist is. The rim joist is typically a 2"x8" board standing on its edge at the outermost portion of the foundation wall. The floor joists are butted up against the rim joist and fastened together. The floor joists and rim joists are also attached to the seal plate, which is the flat board that is fastened to the foundation wall. The rim joist provides structural integrity to your flooring system, and holds the floor joists in their position. Rim joists essentially hold a floor joist from rolling on its side and losing the carrying capacity of the floor. As you can see, the rim joist serves a critical role in the structural integrity of your home. 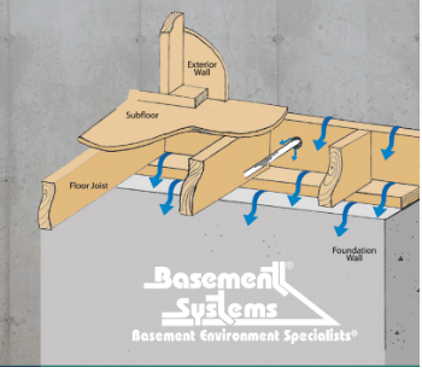 Why though, does the rim joist have such poor insulation value? The answer to this question is simple. Accepted building construction science just didn't require this area to be insulated. It was not that it was wrong to insulate the rim joists, it just wasn't done as standard practice. However, over the last couple of decades, building practices have been much more focused on energy conservation and rim joists were quickly identified as an area for improvement. Once rim joists began to get attention and began to be studied, it was quickly identified as being one of the largest areas of heat loss, air leakage, and pest infiltration in a home. Joist sealing practices were quickly adapted for new and older homes alike.

Spray foam is a type of air sealing and foam insulation that utilizes 2 part polyurethane foam. The material is pressurized and sprayed from a gun onto the rim joist. Once applied the spray foam will expand one to several inches. The finished product a 1 to 3 inch thick closed cell spray foam insulation and vapor barrier.

Flash and batting is a technique of insulating rim joists that involves both spray foam and traditional foam batting. This technique requires a thin layer of spray foam insulation to be applied against the rim joist, providing an air-sealed cavity. Once that is done traditional insulation batting is stuffed into the cavity to create the insulative barrier preventing heat loss.

The final and best option for sealing rim joists is to utilize a rigid foam board. This method requires cutting rigid insulation boards down to size and adhering it to the rim joist cavity. Once placed in the cavity, the foam board is picture framed around with single part expanding foam. The result is a clean looking and effective insulative barrier, air sealant, and radiant heat reflector.

To learn more about RimTight and how Thrasher, Inc can help solve your rim joist problem read the attached brochure.