College of Saint Mary (CSM) in Omaha, NE was in the process of constructing their new state-of-the-art athletic facility that is attached to their existing Lied Fitness Center. This new $18 million addition will provide their students and residents of Omaha with a place for women to learn, train, and grow through fitness and athletics. The new addition, titled College of Saint Mary Wellness & Athletic Center, or WAC for short, will open new doors for year-round training and recreation for the benefit of the CSM community. Furthermore, this will enable the athletic program of CSM to continue establishing themselves as a key player for women’s athletics in the Midwest and add to the already impressive reputation that the college possesses. However, the addition of a 70,000 square foot facility and an 11,000 square foot link for the two buildings presented a few challenges. Fortunately, Thrasher Commercial has done multiple projects with The Weitz Company, and they didn’t hesitate to put their trust in our foundation solutions again.

The south foundation wall of the link between the two buildings was going to require a considerable amount of fill soil after completing the construction. However, fill soil is extremely heavy, and concern began to rise that settlement of the floor slabs and footings would occur from the added fill soil weight. To eliminate the possibility of foundation settlement, a lightweight fill alternative would be required.

In addition to the concern for settlement of the link between the two buildings, the CSM athletic facility project also consisted of a second-floor addition to the existing Lied Center. A 40 by 40-foot space was being added, but the existing foundation was built for an allowable soil bearing pressure of 2,500 pounds per square foot (PSF), and the new addition would exceed its load-bearing capabilities.

To address the concerns of the weight of the traditional fill soil, Thrasher Commercial installed 1,000 cubic yards of low-density cellular 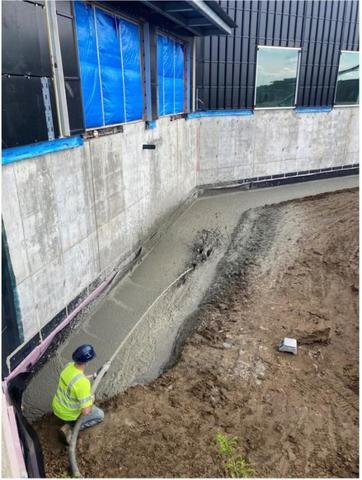 concrete (LDCC) around the foundation of the link between the two buildings. LDCC is a lightweight fill substitute that eliminates the possibility of settlement in the floor slabs and foundation footings, in addition to the lateral pressure that would have occurred. This lower-cost alternative is self-leveling, insulating, and replaces the stone aggregate in regular concrete with air bubbles giving it its extreme lightweight advantage. The design of LDCC can also be manipulated to be permeable or non-permeable depending on its intended use. It’s done by adjusting the density of the material and altering its internal bubble structure. In total, Thrasher Commercial put five LDCC lifts in place to ensure the new addition is permanently safe to utilize. Although its primary use is for void filling, like this application, it has multiple other industrial purposes such as pipeline abandonment, annular filling for tunnels, water and sewers, and slope stabilization.

The second-floor addition of CSM’s existing Lied Center required a much different solution. The foundation was already in place, but the surrounding soil wasn’t designed for the new capacity it would be supporting. To combat this, Thrasher Commercial underpinned the existing foundation using four of Supportworks’ Push Pier Systems to support the additional load. These high-strength steel piers were driven to a depth of 55 feet to provide an extra 24.8 kips or 24,800 pounds of additional support per pier (99,200 pounds total). The push piers were driven into the ground until an appropriate load-bearing strata was discovered beneath the shifting top layers. After acquiring the target pressure, the weight of the Lied Center was transferred through the piers to the layer of glacial till to avoid the insufficient existing soil. Then, to stabilize the soil around the push piers, the Thrasher Commercial team grouted the pier shafts for additional load capacity.

College of Saint Mary was thrilled with the outcome and Thrasher Commercial’s contribution to this project for their community. Their new athletic facility is for the betterment of the university and women's athletics, and Thrasher Commercial couldn’t have been more pleased to partner with The Weitz Company to tackle the roadblocks that arose. This project symbolizes the continuance of strengthening the current strong relationships we have in place with general contractors like Weitz and the trust they put forth in us as an organization.

We’re proud to be your local experts in deep foundations, concrete lifting, leveling, and sealing and retention systems. Interested in learning more or speaking with one of our solution specialists? Email [email protected]

Back to Previous Page
Back to News & Events
Related Categories: commercial