Ms. Severin lived in her home for many years and repeatedly had water in the basement. In addition to the water, she also noticed musty, damp odors and realized her walls were beginning to crack and bow inward. Ms. Severin was afraid to put carpet in the basement and couldn't let her family stay downstairs when they visited. The entire basement could only be used as a laundry room and was not a functional living space.

Thrasher solved the water and dampness issues by installing a WaterGuard subfloor drainage system with a TripleSafe Sump System to ensure the basement would stay dry at all times. The WaterGuard system collects the water at the basement's perimeter and directs it under the floor to a sump location to be discharged outside. The WaterGuard system is unique and unparalleled in the industry with its ability to drain water from the walls, footing-wall joint, and sub-floor areas. All of this is accomplished while the system is placed on top of the footing instead of beside it like other interior drainage systems. Placing the WaterGuard on top of the footing ensures that it will NOT clog up with sediment and silt like other interior drainage systems can do by being placed beside the footing (in the mud). Since a sump pump is a mechanical device, it is all but guaranteed to fail someday. Ms. Severin decided to install a TripleSafe system, which would not only ensure that the water gets discharged in normal rain events but also during power outages and rain events where one sump pump would not be able to keep up with the volume of water.

Even after Ms. Severin's basement was free of groundwater seepage, the threat of mold and odors persisted. Mold does not require liquid water to grow and needs moisture, organic material, and spores to grow. Dry basements can still have enough humidity for mold to thrive. This humidity is from water vapor diffusing from the damp earth outside through the porous concrete walls and floor and into the basement. Basements are also cool and dark, which also contribute to a mold, friendly environment. To eliminate the threat of mold, damp air, and musty odors, Thrasher also installed a SaniDry Basement Air System. The SaniDry accomplishes this by dehumidifying the air and purifying the air as it circulates through it. With the SaniDry taking up to 100 pints of water out of the air per day while removing particles out of the air down to two microns in size, Thrasher was able to drastically reduce odors and prevent mold in Ms. Severin's basement.

Like many block foundation walls in the midwest, Ms. Severin's walls were also bowing in from expansive clay soils outside. If left unaddressed, the foundation walls can collapse from this issue. No two foundation walls are the same and require special attention and detail to determine the best way to stabilize them. To stabilize the walls from bowing in, Thrasher installed 11 Foundation Supportworks Wall Anchors and 6 Carbon Fiber Reinforcers. Ms. Severin was delighted to have both options available due to the inability to install anchors on the North wall because of an extensive city drainage system running through her yard. After the installation, Ms. Severin says she is now able to enjoy her basement without losing sleep at night. The basement is dry, walls are stabilized, and there are no longer musty or damp odors. Ms. Severin was delighted by the amount of work that could be done in a professional and timely manner.

"I originally thought the work would be twice as expensive as it cost, and everyone I worked with at Thrasher's was very professional. Thrasher had my homes' well-being in mind the entire time. I have recommended Thrasher's to friends and others in the community, to fix their basement issues, and be able to sleep well at night like me." - Ms. Severin.

New concrete after WaterGuard Interior Drainage system installation. The color will lighten as it cures. The trench is typically about 8" wide, and new concrete can usually be walked on in 24 hours but should not be covered with flooring for at least two weeks to allow the concrete to cure fully.

Triple Safe Sump Pump System protects against flooding even during a power outage and can also discharge up to 6,000 gallons of water per hour if needed. Discharge lines are routed outside and can usually be buried to keep the discharge line out of the way and conceal them from sight.

Carbon Fiber reinforcers were installed on one wall to avoid exterior obstructions while stabilizing the foundation wall. This type of stabilization system does not require any outside disruption. It has a shallow profile to make it more ideal in finished basements where it can easily fit behind drywall or other wall finishes. 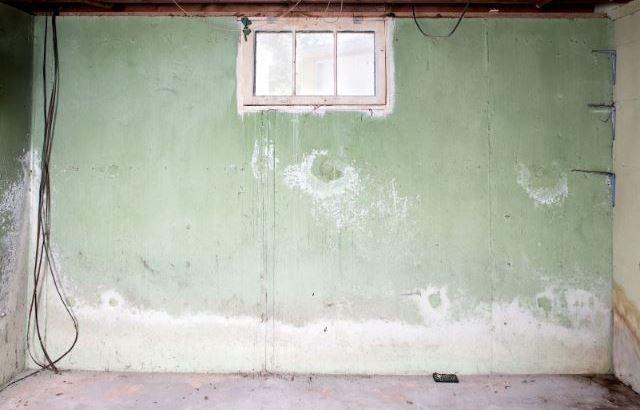 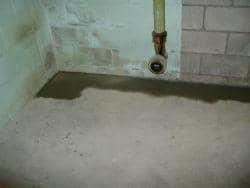 New concrete after WaterGuard Interior Drainage system installation. The color will lighten as it cures. 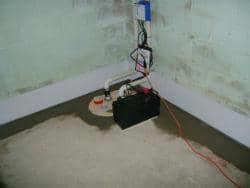 Triple Safe Sump Pump System protects against flooding even during a power outage. 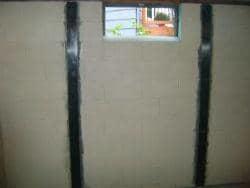 Carbon Fiber reinforcers were installed on one wall to avoid exterior obstructions while stabilizing the foundation wall.