The Andersons built their home on Storm Lake about 8 years ago. The contractor who built the home suggested a gravel based crawl space with a complete air exchanger installed in the crawl space. The furnace was also located in the crawl space. Problems arose the very first winter after construction was complete as the windows throughout the house kept icing up from the inside. Initially the Andersons thought that the windows might have just been defective, so they contacted the manufacturer of the windows to see what could be done. After an investigation of the home, the manufacturer agreed to replace all the windows at no cost but never really pinpointed the underlying issue. The Andersons also noticed that they were running the air exchanger year round, had 4 dehumidifiers running, as well as running ceiling fans throughout the home continuously. Up to this point, nobody had ever thought the crawl space beneath the home could be causing any of the issues because the crawl space appeared to be dry.

Upon further investigation by Thrasher, it was found that high amounts of humidity and water vapor were being drawn upstairs from the dirt crawl space. It was also determined that the air exchanger and dehumidifiers running constantly were causing the Andersons to pay hundreds of dollars for wasted energy. Thrasher remedied the problem by installing a 20-mil thick polyethylene vapor barrier called the CleanSpace Encapsulation System and also installed vent covers to seal off the outside air. Even though the crawl space never had standing water in it, there had been a constant stream of moisture being pulled from the exposed earth. The installation sealed off the home from the soil in the crawl space. The Andersons were able to shut down the whole-house air exchanger as well as 3 out of the 4 dehumidifiers, drastically reducing their energy bills. The Andersons also reported that there was no longer any ice forming on the inside of the windows.

"I would recommend Thrasher to anyone."

“We were having some issues with moisture in our crawlspace and weren’t quite certain what to do. We stopped by the Thrasher booth at a local home show and met with their representative, Mike Haye. Mike arranged a meeting to come into our home the following week and offered a solution to fix our issues. Mike was very professional, answered our questions and did not try to “sell” us something that wasn’t going to work for our situation. The installation crew was on time, professional and completed the project according to the timeline Mike had established. Mike has followed up and I appreciate the service after the sale. I would recommend Thrasher to anyone.” – The Andersons 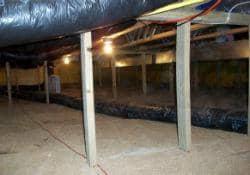 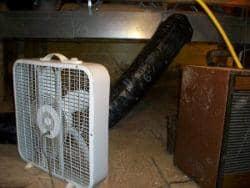 Dehumidifier and fan before installation 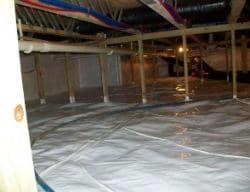 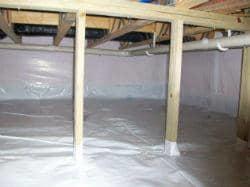