Homeowner that had some health complications and an allergy to mold, needed to clean up and dry out their crawl space near Wichita.

When Mary and Dave built their home six years ago, they thought they were doing the right thing by ensuring vents were in their crawlspace. Outdated building science theories recommended venting a crawlspace to allow groundwater and moisture to escape. Of course, recent studies have shown that the opposite is true and that vents let humid air into the crawlspace where it cools and condenses into water.

Recently, the couple noticed mold growing near their crawlspace entrance and this escalated concerns of the humidity levels in the crawlspace. Dave had an electrical outlet installed with the intent of getting a sump pump installed to pump groundwater out of the crawlspace. His recent heart surgery prevented him from completing the project. Mary was concerned for Dave's long-term health since he is allergic to mold, and they decided it was best to get a professional to help.

Being in the smaller community of Admire, Kansas, between Topeka and Emporia, Kansas, means it is harder to find specialty contractors for this type of work. After reaching out to several contractors, they scheduled two companies to give them estimates. Since Mary and Dave appreciate working with local contractors, they hoped to work with the contractor from Emporia. This contractor came to look at the problem and agreed to send them a proposal. Unfortunately, this contractor never sent a proposal and didn't even respond to follow-up calls from the couple.

The next appointment was with AJ LaVoie, out of Thrasher Foundation Repair's Wichita office. Thrasher serves the entire central and eastern portion of Kansas from offices in Kansas City and Wichita. AJ began by entering the crawlspace and doing a thorough inspection. Mary mentioned that she was surprised that he even went into the crawlspace because the previous contractor just did his measurements from outside. AJ admitted that would be more comfortable but that he wouldn't be able to identify all of the potential issues if he didn't see it first-hand. AJ also was able to take photos in the crawlspace to share with Mary and Dave to help them understand the full scope of the problem. After his inspection, AJ was able to identify several issues. Standing water in the crawl space was the most apparent concern, but high wood moisture content also pointed to the floor's weakening floor joist system above. Mold in several places and rust on the floor support system was also found.

All of the problems in this crawlspace were a result of elevated moisture levels. When caught early, the solution is to eliminate the moisture, but in this case, the continuous presence of moisture had already done other damage. The dirt floor and open vents had allowed standing water to evaporate and brought hot, humid air into the crawlspace in the summer. AJ's inspection was done in the winter when the humidity levels were low, but by testing the wood moisture content, he was able to show the homeowners that the levels had been high recently. The moisture levels in the wood floor joists were allowing the wood to lose strength. The high humidity had also begun to rust out the support jacks holding up the center beam.

AJ walked Mary and Dave through the problems and what was causing them. He also was able to provide a few solutions that would solve all the issues. Encapsulating the crawlspace with the Cleanspace System and sealing the crawlspace vents isolated the home from the damp ground. A sump pump and drain lines would keep water out, and installation of support jacks to reinforce the upper floor rounded out the solutions.

A three-person crew was able to begin work in February and complete the project in 3 days. They started by installing drainage lines around the foundation's perimeter and drained it to a sump pump with an air-tight lid and an alarm. Next, the crew installed the CleanSpace liner on the dirt floor and up the foundation walls to seal out the earthy dampness. Once the earth was sealed off, the crawlspace vents could be sealed closed to prevent humid air from entering the crawlspace from outside.

The last step was installing the new SmartJacks to support the wood framing above.

The difference in the crawlspace was noticeable immediately. The air began to dry out, and the space was much brighter.

The area is now useful for storage and won't grow mold, have sagging floor joists, or create unhealthy air that can escape into the living space above.

After the project, Mary stated, "I was impressed by the crew. It was bitterly cold, but that didn't slow them down. Tyler and the crew were very polite and accommodating."

For more information on how Thrasher Foundation Repair can deliver exceptional results on your home improvement project, give us a call or reach out here. 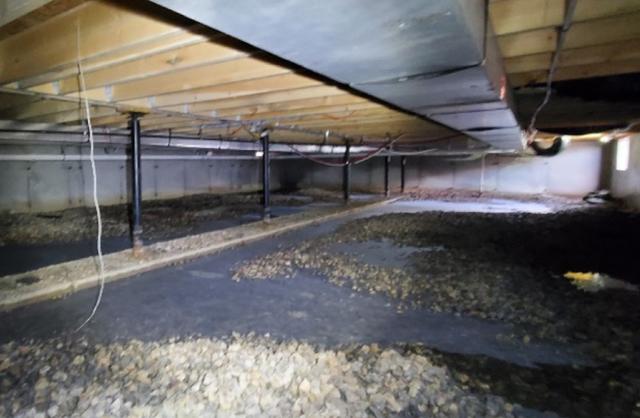 Before- Water is pooling on the dirt and gravel crawlspace floor 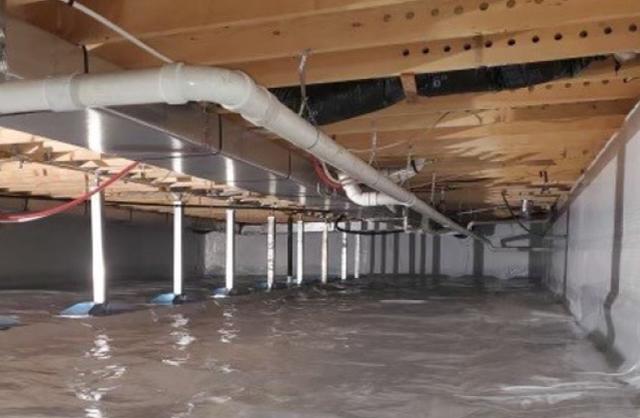 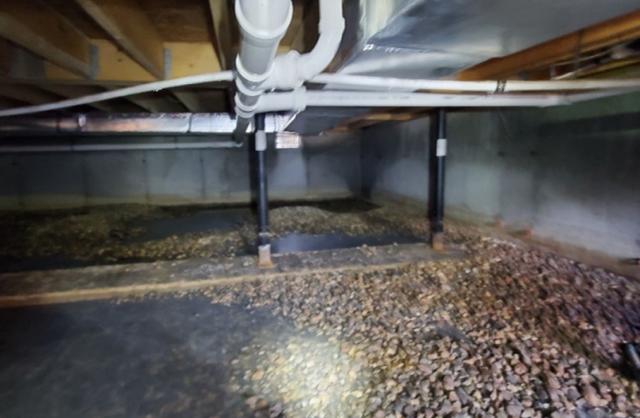 Before- Crawlspace support jacks are rusting from the presence of standing water and high humidity due to open vents. The wood moisture content is high enough that the floors are prone to sagging 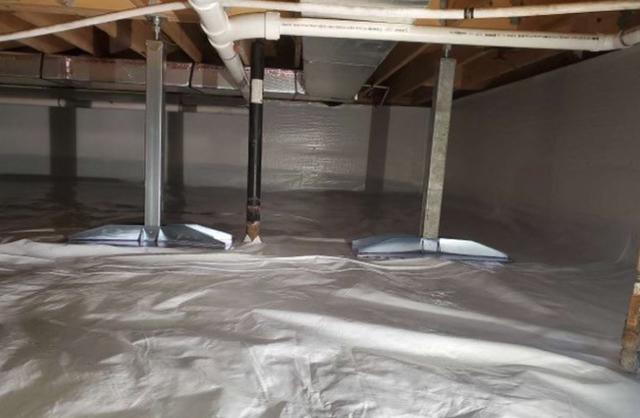 After- New galvanized support jacks are in place to support the floor joist system. The drainage system and vapor barrier will prevent further erosion and mold growth