Mr. H.'s house is a wood-framed, raised ranch built in the 1960s. The foundation was constructed from 8-inch concrete block. After purchasing the home, he noticed several signs that convinced him that the home foundation was in a state of movement. Many cracks in the drywall had begun to appear. The northwest corner of the house was experiencing differential settlement of approximately 2 inches. The dining room floor in the Northwest corner was slanting toward the perimeter. The adjoining west rear garage wall was also settling, and cracks in the block were significant.

Mrs. V has a house built on a 2 ½ foot (8 inch) concrete block wall. The house was built in the late 1970s, with brick constructed on the whole house. There was no basement in this house, and the entire house sat on a concrete slab. Mrs. V mentioned to Thrasher that there was significant cracking occurring on the west side of the house, with tangible signs on the corners. There were horizontal cracks, as well as vertical cracks outlining the west wall. With the foundation being only 2 ½ foot deep in the ground, this allowed for several problems to occur. Frost is a prominent force in the Midwest as clay soil is very expansive and dense. Frost can reach depths of 32 inches – 42 inches, depending on the winter weather in Sioux City. Since the foundation wall is not below that frost line, this can cause a lot of pressure on a foundation. The weather pattern is another critical factor in the settlement on foundations with a slab on grade. In a very dry summer, soil layers dry out below the surface, which causes the clay soil to shrink. This allows for water to extend deeper below the surface, which can cause washout to the ground during any extensive rain. With washouts comes voids. If a void is to form under the footing, the footing can now break and continue to fall into that void space. This allows the house to fall into the void, creating cracks in the house (drywall, brick veneer, concrete block, etc.) As this pattern repeats, the house's settlement will generate more significant cracks and bigger problems. Mrs. V's goal was to stabilize the foundation altogether and not worry about her home completely giving away to the west side.

Thrasher, Inc. permanently corrected the problem by installing 11 Push Piers. The piers were installed on the exterior and interior of the Northwest foundation walls and the rear garage wall. The piers were driven to between 109 and 124 feet. The piers' installation stabilized the foundation, and the house was lifted close to its original position. "I am very pleased with the work that Thrasher did with my home. I can now go forward with my remodeling plans upstairs and downstairs knowing that my foundation isn't going anywhere. Ian, your Foreman, really knew what he was doing. Ian did a great job along with his crew. The guys worked hard and kept me informed along the way as to what part of the process was happening next." -Mr. H.

Thrasher permanently fixed this problem by installing 10 Helical Piers, along with a Frost Footing and PolyLevel. Thrasher excavated and exposed the footing along the whole west side of the foundation and 3 feet around on the corners on the NW and SW side. Since the foundation was not below the 36" protocol, Thrasher installed a frost footing. A Frost footing is highly recommended if the foundation wall depth or bottom of footing is less than 36" into the ground. A footing may or may not be present. Less than 36" has the potential of frost getting below the foundation and cause heaving. The Helical Piers was then installed along with the frost footing. With this method, Thrasher can permanently stabilize the foundation. Thrasher installed each Helical Pier down to bedrock (load-bearing strata), with no attempt to lift the foundation. The west side of the house was down approximately 1". The slab had also cracked and began to sink, which caused some windows not to work correctly. Thrasher installed PolyLevel, a lightweight, compatible foam in the interior part of the home to permanently support the slab and reduce the slab's chance of falling into a void. With the Thrasher process, this home on the west side was stabilized completely and gave Mrs. V her peace of mind knowing her family home will stay safe with no further settlement to the house's west side. 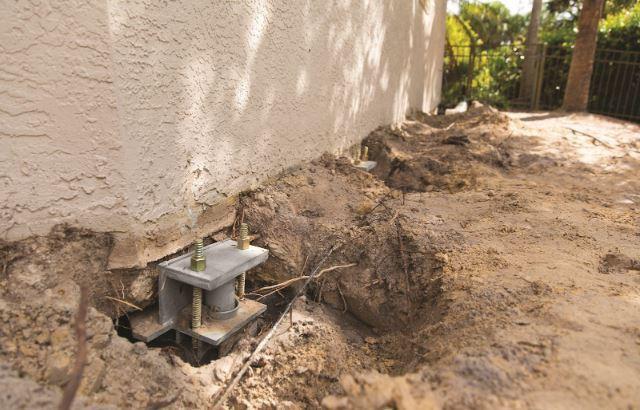 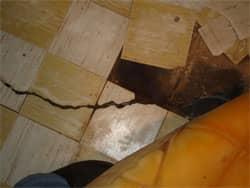 A huge floor crack due to the settling foundation. 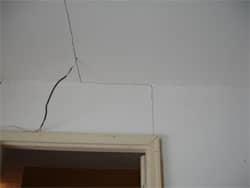 Before: Drywall crack off the corner of a door in the house. 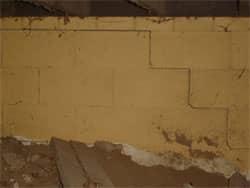 After: Foundation crack closed after lifting the home with the push piers.