If we encounter unexpected conditions on your project, Thrasher Foundation Repair has the adaptability and expertise to develop and implement alternate solutions.

Daniel's residence was only nine years old and showed signs of foundation settlement in different parts of his home. Daniel didn't know precisely what was occurring with his house, but he knew something wasn't right. Daniel could see cracks in his foundation and in the drywall and other interior finishes.

He also had some doors and windows that were sticking and hard to open. Fortunately, when Daniel was building the home, he decided to purchase a 10-year warranty covering foundation settlement. After much research, Daniel called Thrasher Foundation Repair to assess his home. Thrasher Foundation Repair's Customer Care team listened to Daniel's concerns, determined it was something they could help him with and scheduled a free inspection for him. Our System Design Specialist met with Daniel to hear about the issues he was experiencing, diagnose the problem, and build a plan to fix his foundation permanently. After meeting with our System Design Specialist, Daniel contacted the warranty company to inform them of the issue.

The warranty company hired a third-party engineer to analyze the situation. The engineer concurred with Thrasher Foundation Repair's diagnosis of the problem and our recommended repair plan.

As the project start date approached, Daniel noticed further signs of damage in the house. Our System Design Specialist met with Daniel again to evaluate the situation and determine if any additional work needed to be completed. After completing a further evaluation, the System Design Specialist determined that additional work was necessary to permanently fix the foundation. The warranty company once again consulted with the engineer, who once again agreed with our recommendations.

At the start of the project, Thrasher Foundation Repair's Production Team Leader identified an additional issue that wasn't typical and couldn't have been identified before the beginning of the project. A regular 2- story home's basement foundation is 8 to 9 feet below soil grade, and a garage foundation is typically 4 feet buried below soil grade. When Thrasher Foundation Repair's Production Team Leader began excavating the foundation to expose the foundation's footing, he discovered that the garage's foundation was 9 feet below grade on the entire garage. This resulted in Thrasher Foundation Repair having to modify the engineered installation plan to account for the extra soil and concrete's significantly increased weight. To attain the desired foundation lift Daniel wanted to achieve, we needed to install the push piers closer together. The warranty company's engineer agreed with our assessment and recommendations. For peace of mind, the homeowner requested that Thrasher Foundation Repair install five additional piers on a section of the house that had not settled and wasn't covered by his warranty. Thus, the whole foundation perimeter was piered, protecting the entire foundation permanently. This was important to Daniel as he wanted the peace of mind that he would never have to worry about this issue again. Daniel's ultimate goal was to be able to repair the cosmetics of his home and return it to the original condition when the house was built.

Thrasher Foundation Repair was able to successfully stabilize and lift Daniel's foundation back to its original elevations.

The doors and windows immediately became operational and were no longer sticking and were no longer hard to open and close. Also, Daniel was able to hire an additional contractor to repair the cosmetic damages to his drywall and other finishes in his home. Due to the long-term warranty provided by Thrasher Foundation Repair, Daniel was confident that these repairs would last and would no longer be an eyesore in his home. He had peace of mind that these issues were behind him and no longer needed to worry about his home's foundation issues.

After the project, Thrasher Foundation Repair's Customer Care Team followed up with Daniel to get his feedback and ensure he was delighted with his project's outcome. This is what Daniel had to say.

"Thrasher was very professional. I was kept informed throughout the entire project. The cleanliness was exceptional, and follow-up was done on all aspects of the project from beginning to end." – Daniel I., homeowner.

Thrasher Foundation Repair was excited to complete this project for Daniel and give him peace of mind moving forward. 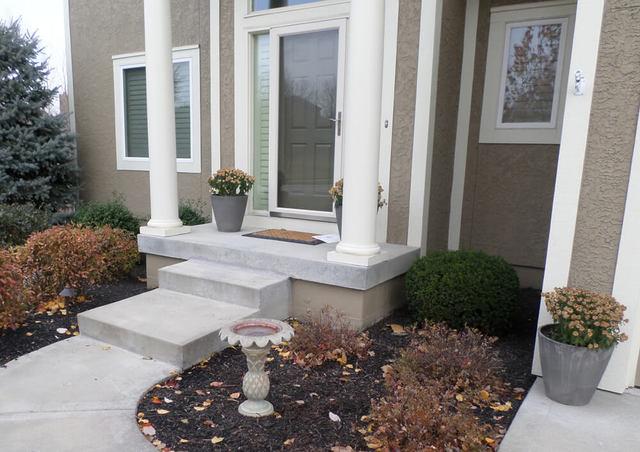 The steps will be removed and the surrounding soil excavated so that resistance piers can be installed under the front stoop. 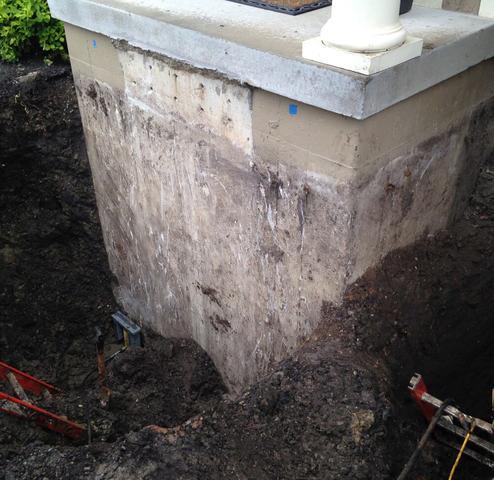 The prep work has been completed; lift brackets are being placed prior to pier installation. The excavated areas were filled in and the concrete steps and affected area of the sidewalk were replaced upon project completion.