Thrasher Foundation Repair installed resistance piers to lift the foundation back to its correct level.

Whether it is a homeowner, property owner, or business owner, it's never pleasant to learn that your foundation has structural issues. Often learning of a foundation issue will bring fears of if the foundation and property can be repaired and how much it will cost. Often homeowners and property owners will delay making the call to get their foundations repaired because they are simply hoping the problem will go away or at least not get better.  However, we know that their problems never get better on their own and will only worsen over time. A private airport hangar at KC International is an example of a problem getting worse over time. Fortunately, Thrasher Foundation Repair made the repairs in time and before additional repairs were needed.

A private airport hangar at KC International was having concerns with the structural integrity of the hangar's foundation. A separate facility company managed the hanger, and they began noticing cracks and settling floors around the perimeter of the foundation. The facility management company contacted Thrasher Foundation Repair to have us evaluate the facility.

Our crews needed to be flexible to accommodate aircraft movement in and out of the hangar.

The customer considered the proposal, but due to the airport hangar's unique demands, they were delayed in deciding to move forward with the repair work.  It took nearly seven months from the initial inspection time until the repair work began on the hangar.

Over the course of those seven months, the hangar continued to settle.  By the time Thrasher was on site making the repairs, the hanger was found to have dropped a full 4.25", which was .75" more than seven months prior.  Needles to say, the facility management company was nervous with the continued settlement but was relieved that Thrasher would still make full repairs on the structure.

To complete the work, Thrasher installed multiple piering systems with varying capacities.   A total of 46 resistance piers were installed along the three foundation walls.

Once all the resistance piers were installed, the hanger's foundation was lifted back to its original position.   During the repair process, voids were found under the hangers concrete floor and were filled with grout. Thereby stabilizing the floor and preventing any further slab floor settlement.  The final stage of the repair process was to stabilize a 70' long foundation crack.  Carbon fiber material was installed across the crack to stabilize it and prevent any further separation.

In the end, the project was completed on time and within budget.  Even though there was active settlement occurring on the foundation of this airport hanger, Thrasher could make the needed repair work before the condition worsened to the point of needing to change the scope of work.

When a foundation problem is identified, it is always best to seek professional advice right away.  This will not only save time and money, but it will also ensure that you get your business back to full operations as soon as possible and limit any potential downtime. Thrasher Foundation Repair strives to not only be the best repair contractor but to be your partner. We want to partner with you to solve your foundation problems and be a partner who helps you minimize your business impact. 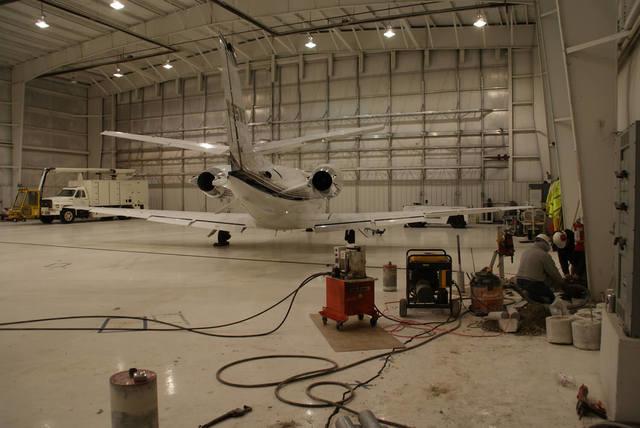 Thrasher's foundation repair crew is excavating along an interior wall to underpin the column pads with customized resistance piers. 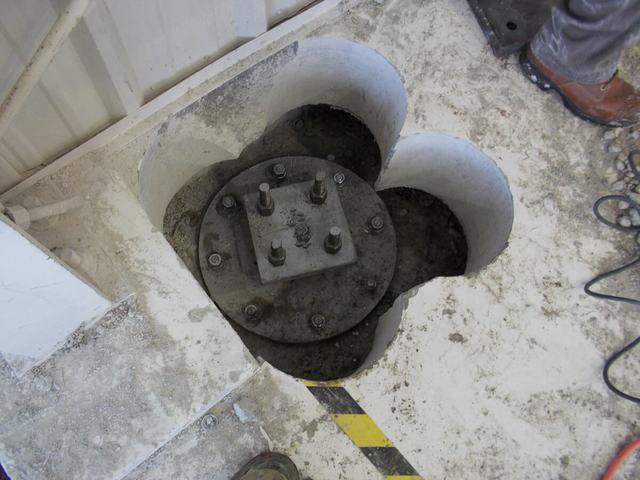 Our specialized installation process, with custom engineered and manufactured brackets, results in minimal disturbance to the structural integrity of the column pad.