Does your home or commercial property have bowing foundation walls, sinking concrete slabs, or leaky windows in the basement? There is no reason to worry — Thrasher Foundation Repair is your trusted expert, providing solutions for these problems and so much more since 1975.

Contact Thrasher Foundation Repair to schedule a free inspection and cost estimate on any of our reliable services, including basement waterproofing, foundation repair, crawl space encapsulation, and concrete repair. We proudly serve Sedalia, MO and nearby areas.

Schedule Your Free Inspection
Testimonials From Sedalia
I have a peace of mind knowing that my floor doesn't have any problems now. I'm glad my home can now be renovated a little.
Testimonial by Robert S. from Sedalia, MO
See All Testimonials
Reviews From Sedalia
See All Reviews
Contact Us For
An Estimate!
Click

to view requests in Sedalia

No matter how small the foundation damage may seem, problems can worsen and impact other areas of a home or building, leading to issues like sticking windows and doors, cracked drywall, a tilting chimney, and moisture intrusion. From cracked foundation floors to bowing basement walls and foundation settlement, Thrasher Foundation Repair provides permanent solutions for these structural problems and more.

Schedule a free foundation inspection and service estimate to get personalized repair solutions for your property. We proudly serve Sedalia and nearby areas in Missouri.

We can eliminate basement flooding and leaking with a patented waterproofing system customized to suit any property, creating a dry below-grade space and keeping it that way for years to come! We proudly serve Sedalia and nearby areas in Missouri.

Schedule a free basement waterproofing inspection and service estimate to learn more. We proudly serve Sedalia and nearby areas in Missouri.

Do you have a musty, wet, and humid crawl space in your home or building? Don’t deal with the mess on your own. Contact the crawl space encapsulation and repair professionals at Thrasher Foundation Repair! We provide a suite of crawl space solutions designed to create a drier, more secure area, including a moisture-proof vapor barrier, crawl space doors, crawl space support jacks, and more.

If you’re tired of sinking, cracked driveways, pool decks, sidewalks, or other concrete slabs around your property, contact the concrete repair professionals at Thrasher Foundation Repair. We offer simple, innovative solutions that are far superior to the standard mudjacking or concrete replacement. Our cracked concrete repair, concrete leveling, and concrete sealing systems install with no mess and no stress. Plus, they are quick to cure, so you can use your slabs soon after installation.

Never worry about UV rays, debris, gas, water, or other liquids ruining your slabs. Our solutions are incredibly durable and address the underlying cause of concrete damage, meaning you get lasting results that save you money!

No matter the job - we aren't going to feel good about the hard work we've done until you're happy. So we'll do it right or make it right. That's the Thrasher promise.

For the last 45 years in the basement and foundation repair industry, we've focused on the value of doing whatever it takes to get the job done and "wow" our customers every step of the way.

Before and After Pictures from Sedalia 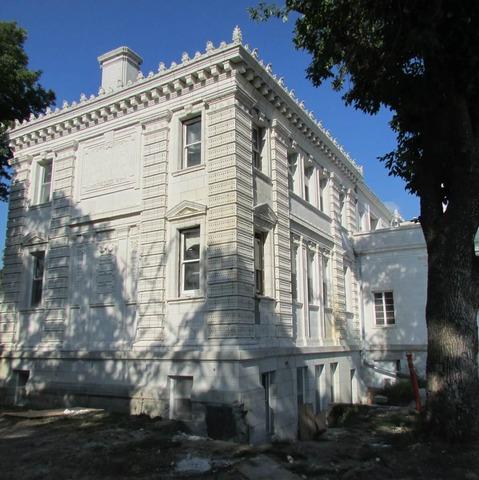 Foundation stabilization by Thrasher was an integral part of the repair and restoration of the historic Sedalia Public Library.

Parts of the structure had settled 5″.

The extreme drought that began in the late spring of 2012 had devastating effects across the Midwest, particularly on lawns, crops and foundations. One building hit particularly hard was the Sedalia Public Library. The Sedalia Public Library is a prized building to the local community, and it has been listed on the National Register of Historic Places.

The Sedalia Public Library is located at 311 W. Third St, Sedalia, Missouri. The Sedalia library was first founded in 1895 but was located in the basement of the Pettis County Courthouse. In the Fall of 1899, they were awarded a $50,000 Carnegie Grant to build a new library. This was the first grant to be awarded by Andrew Carnegie in the state of Missouri.

“We were told by the structural engineer that we were in imminent danger of collapse.” – Library Director Pamela Hunter, in an interview with KMBC-TV.

That grant money allowed the residents to build the then-new library. The library is built in the Greek Revival Style of architecture and was constructed of ornate white terra cotta stone with a limestone foundation.

The library was dedicated in 1901 and has been operational ever since, serving the citizens of Sedalia and the greater Pettis County. That is until the concerns over foundation problems arose in 2012.

Foundation problems were first identified in 2012 when a construction worker found "extremely wide" cracks in the foundation in one area of the library. The worker's concern led to a full investigation and, ultimately, the discovery of other severe foundation issues throughout the library.

The library hired a geotechnical engineer to investigate the site subsurface. During the investigation, it was determined that the soil's extreme dryness around the building's perimeter was a significant factor in the ongoing foundation settlement. Further investigation revealed that the underlying bedrock also had large voids beneath them. These large voids were likely the hidden contributor to the over 5" settlement throughout the years. As the corner of the library had settled, it also rotated outwardly and put the foundation and structure at extreme risk of collapse.

Previous attempts by other contractors had been made to correct the foundation settlement issues. Some of the attempted repairs included installing an extensive supplemental concrete footing, along with an elaborate below-grade watering and de-watering system. The supplemental concrete footing and watering system were combined with stabilizing the foundation and controlling below-grade moisture. While well-intentioned, the previous attempts were unsuccessful. The supplemental footing's added weight may have even exacerbated the settling issue, as evidenced by the continued settlement.

The engineers were determined to solve this settlement issue permanently and to protect the historical landmark.

The recommended solution from the engineers was to install a customized micropile system. The plan was to bypass the shallow, unstable soils and fully transfer the foundation load's weight to the competent and stable bedrock. To achieve this result, any piering system would have to be drilled and advanced through the shallow rocks.

Thrasher was selected to perform this stabilization work due to their experience and expertise in micropile installations. Thrasher stabilized the building by first drilling through shallow rock formations and the underlying voids. Thrasher had to drill to depths of upwards of 40 feet to get into competent rock. Forty-nine high-strength steel resistance piers, with an ultimate capacity of 140,000 pounds each, were installed through the pre-drilled holes. The piers were then grouted with high-strength grout to add further lateral and vertical stability to the system. Once the exterior foundations were stabilized in place with the pre-drilled piers, the interior columns, which had not settled, had to be lowered to put the building on a uniform plane. Finally, the unstable soil excavated during the piers' installation was removed and replaced with suitable fill soil.

The result was a permanently stabilized exterior foundation, and interior columns all leveled out to a uniform plane. Sedalia citizens could now rest easy that their historic library was finally placed on solid rock and would not move in the future. 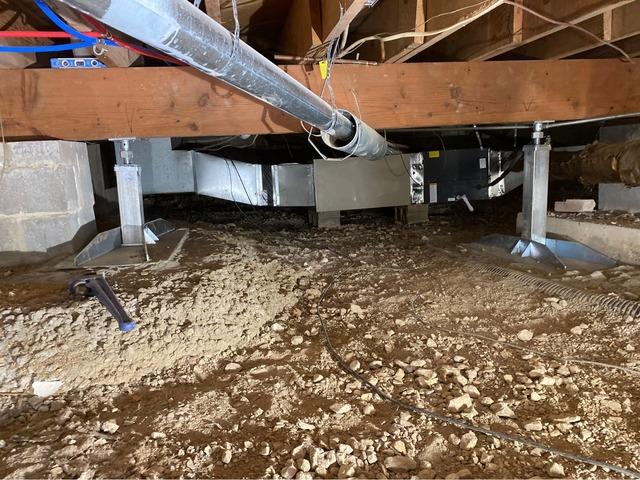 This homeowner was struggling because he just bought his home recently, and he noticed that the drywall was separating at the ceiling around his bathroom door. He was concerned that this would progressively get worse, so after seeing our help of his neighbor with a similar issue, he gave us a call.

We sent System Design Specialist Brandon Powers to inspect the support structure of the homeowner's crawl space because this is what often causes cracks in upstairs drywall. Brandon found that the upstairs floors were uneven and that was causing the issues of the drywall. The floors being uneven were due to the existing support structures in the home's crawl space were not functioning anymore. Brandon knew just what to do, so his team installed SmartJacks to permanently stabilize the floor and lift it back to its original position. They also installed a new TripleSafe Sump Pump so that there were no more issues with support beams failing.

The homeowner was happy that he would have a peace of mind about his new home. Check out his crawl space repair!

See All Before & After Images
Recent job requests in Sedalia, MO

In Sedalia, MO, our crews installed three push piers to lift and stabilize a home's foundation. The homeowner has had work done by us before, and they didn't hesitate to contact us for another home repair solution. They first realized that the home was settling because the front door couldn't open all the way because of the sag in the floor.