A family in Lincoln, Nebraska has enjoyed their home for many years, but they always knew they would end up with water in his basement when a significant rain would come. Sometimes rainfall would wake them up at night, and they would head down to squeegee water toward the floor drain and move items to higher ground. It wasn't until a few months ago that the homeowner noticed the basement walls had started to bow, and there was a horizontal crack that appeared. They were curious but didn't overthink it until he heard a pop, and when they went downstairs to look and noticed an electrical conduit had popped off the wall.

For the owner, this was home, and they planned on it being home for a long time. He said, "This is our long-term home. We want to be proactive and fix problems before they become worse."  They already knew who he would call when it finally reached the point that he wanted it fixed. They had experience working with Thrasher Foundation Repair at their Lincoln, NE business.

The customer said, "Thrasher lifted, leveled, and sealed the concrete at my business. I was impressed with the crew and the finished product, so when the outlet popped off the wall in my basement, I knew who to call if I wanted it fixed right."

Upon further investigation, the homeowner noticed that there were cracks on three walls in his basement. Most of the fissures were covered by stored items, but they had probably been there a while. All of the walls had horizontal cracks, and two of them also had stair-step cracks in the corners.

The customer had Eric Wulf, a veteran System Design Specialist from Thrasher, out for a free inspection and estimate. Eric walked the homeowner through his findings, and they agreed on the level of protection that the customer was comfortable with. They appreciated knowing all his options and being able to customize a solution that met his needs. The final design included:

When supporting bowing basement walls, there are several options. The determining criteria revolve mostly around obstacles inside the basement and outside. The homeowner had several impediments that made a mix of solutions the right answer.  Wall Anchors, I-Beam Supports, and Carbon Fiber Reinforcers were all included in the final design. Having multiple solutions sets Thrasher apart as they can customize the solution to reduce collateral damage. Many contractors only offer one answer and have to find a way to force that solution toward every problem, creating extra work and sometimes damage to the property.

The basement waterproofing design included a drainage system, vapor barrier, and sump pump. They already had a radon system, so the waterproofing system had to be installed in a way that would not compromise it. It also made the need for a vapor barrier a higher priority. Vapor barriers are a good idea on basement walls because they prevent water vapor from transmitting through the walls, but they also help reduce radon by blocking it from entering through the walls. In conjunction with a perimeter drainage system, they can help the radon system work better.

The homeowner liked knowing he had options when it comes to a sump pump. Ultimately they decided to go with a more basic model that did not include a battery back-up pump. They know they can add that in the future if he wants the extra protection. Since they don't have a plan to finish their basement anytime soon, they were willing to take that chance.

The Thrasher Foundation Repair crew installed the basement waterproofing system and foundation repair system in just three days, despite cold temperatures. The basement now has stabilized walls, dry floor and walls, and is brighter and cleaner than before, thanks to the radiant white vapor barrier. The solutions have a 25-year warranty, and the homeowner will rest easy knowing he chose the experts. They called into the office after the job to let us know, "The crew did a fantastic job and had great attention to detail."

If you suspect that you are seeing the effects of foundation wall failure, or anything else that may be threatening the structure of your home, it’s time to call in an expert like Thrasher Foundation Repair. In 45 years of business, we’ve seen it all and fixed it all. We are the local experts for all your foundation repair needs in Nebraska, Iowa, Kansas and Missouri. We offer warrantied solutions that permanently repair foundation issues. Contact us for a free, no-obligation foundation inspection today! By the time we’re done, you’ll know exactly what is causing the problem, exactly what it will take to repair it permanently and exactly how much it will cost.

To schedule your free inspection, call or fill out the contact form, here. Don’t wait until it’s too late. 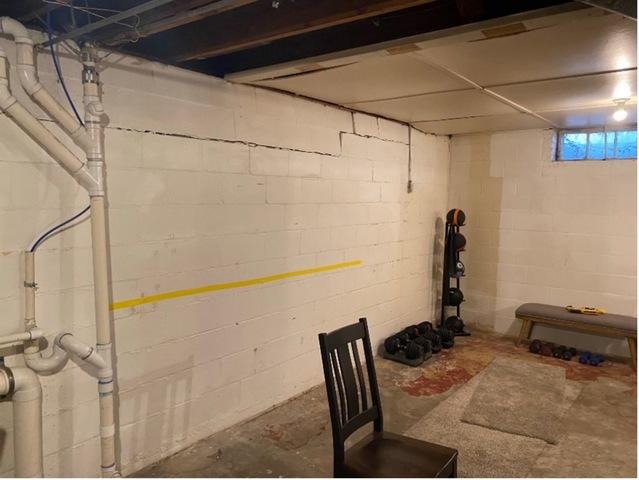 Before: This basement wall was bowing in, and a horizontal crack was visible near the top of the wall. 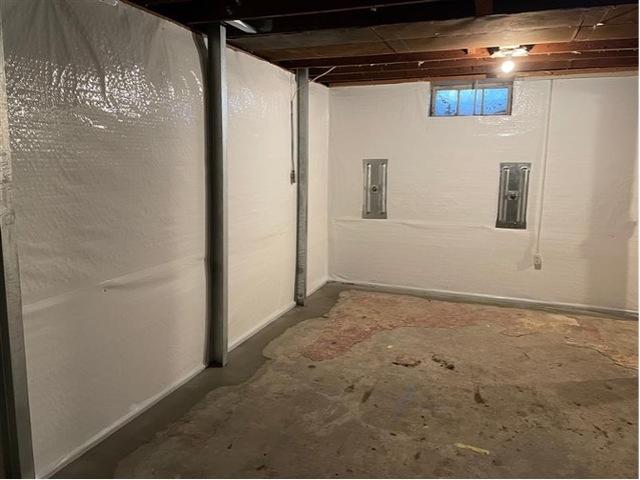 After: The repaired wall to the left is supported by PowerBrace Beams, while Geo-Lock Wall Anchors support the wall to the right. Also visible is the newly installed vapor barrier on the walls and new concrete along the floor's perimeter, where Thrasher installed a new drainage system. 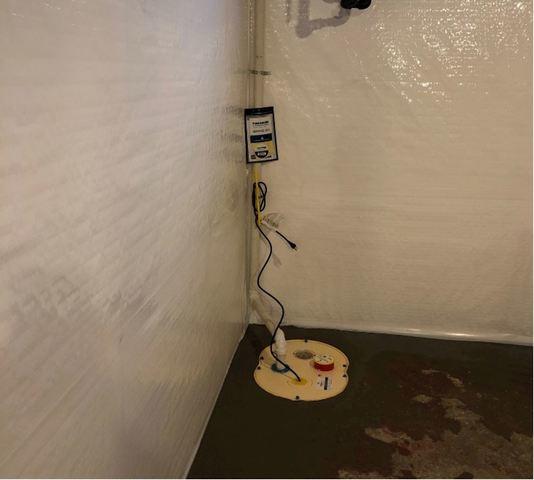 A new sump pump is installed in the corner. It has a built-in floor drain, airtight lid, and high water-alarm as standard features. The customer can add a battery back-up pump at any point in the future.