Get a Free Inspection

Nebraska, Lancaster County homeowners have experienced more than their fair share of volatile weather conditions that often leave homes either damaged or flooded. We invest in our homes, both emotionally and financially, which is why you should hire experienced professionals in concrete repair, foundation repair, crawl space repair, and basement waterproofing when your home needs repairs done the right way. Thrasher Foundation Repair is there to assist and serve all homeowners in Lancaster County, NE. Contact the team to schedule a free estimate today.

Thrasher Foundation Repair is a home improvement company that strives to deliver the highest standards in service delivery to homeowners in Lancaster County. We understand the value and importance of your home, which is why we assure you that you will feel satisfied and at ease with the work carried out. Whether our installation crews are fulfilling a concrete repair, basement waterproofing, crawl space repair, or foundation repair to fix your home, you will always receive both long-lasting and first-rate results.

Contact Thrasher Foundation Repair to see how we are able to help your home withstand the Lancaster County weather elements, and schedule a free service estimate today!

Get A FREE Estimate!

Schedule a free foundation inspection and service estimate for your home in Lancaster County.

Get A FREE Estimate!

Get A FREE Estimate!
Before and After Pictures from Lancaster County 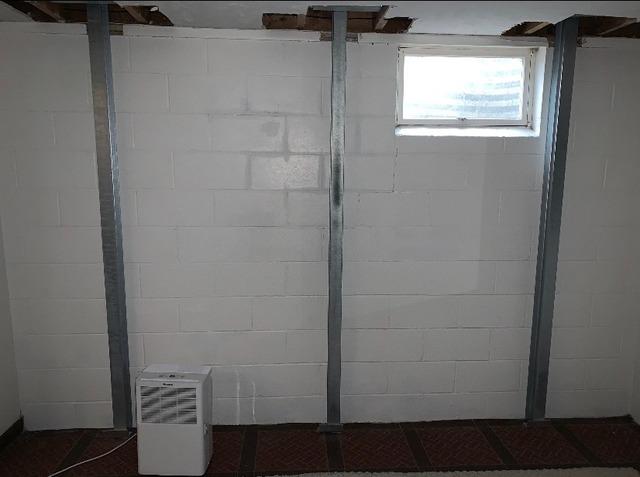 Patricia N. is a proud homeowner in Lincoln, NE and has plans in place of this being here forever home. Thrasher has helped in the past with making this home the one that can stand the test of time by waterproofing the basement. During the annual maintenance, our team always performs a thorough inspection to make sure small problems aren’t going unnoticed, and therefore turning into bigger problems. Upon the inspection, System Design Specialist Wes Marshall noticed two basement walls showing signs of stage-two failure, caused by the soil surrounding the foundation. Fortunately, the problem was spotted in its early stage and Thrasher could provide a solution before it were to get much worse. Without hesitation, Patricia put her trust in Thrasher to give herself a peace of mind, and confidence that it was going to be done right.

Wes Marshall and his team arrived in Lincoln, NE to begin the project. Patricia opted to have them install our PowerBrace Support System to permanently stop any movement inward from the walls and reverse the damage over time. PowerBrace is a galvanized steel beam that runs the full height of the foundation and then is fastened to the concrete basement floor. It’s then attached to the floor joist using one of our brackets to give it the permanent security it needs. All installation is done internally and saves Patricia the stress of any external excavation.

Patricia N. was grateful that we were able to spot the failing walls early and provide a variety of solutions for her benefit. She was impressed with the crew’s wealth of knowledge and presentation to help her understand the process. Patricia is now stress-free and happy with her forever home. 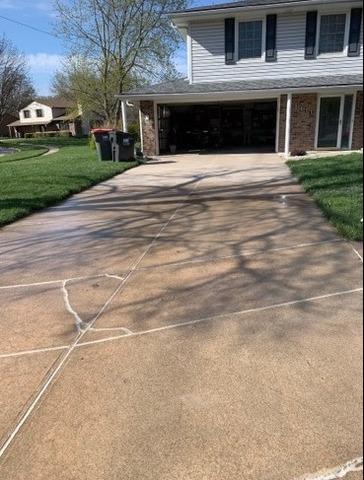 Becky M. moved into her home a couple of months ago and was looking to start getting it back in order. Her driveway was uneven and the concrete was starting to crack. Looking for a long term solution, she decided to call Thrasher after receiving a referral from a friend, who had a great experience with us.

We sent System Design Specialist, Matt Rehn out to her home. He was able to identify that her driveway and garage were starting to crack due to street creep and she didn’t have her control joints caulked correctly. We installed a 3 part concrete protection system and compression guard, to fix the settling concrete and stop the street creep from impacting her driveway and garage. 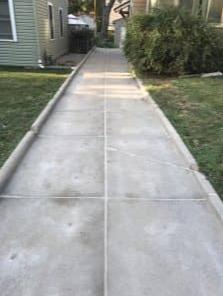 Long narrow driveways can be difficult to repair, especially when houses are in close in proximity. There are a couple of options when it comes to repairing driveways. Some contractors still use the old-school repair for settled concrete. They use heavy equipment to demolish the cracked, settled sections of concrete. With concrete replacement you often get a damaged areas, such as yards, and that's off limits until the new concrete hardens and cures. More importantly, the new concrete is going onto the same problem soil which caused the issue in the first place. Another method is mud jacking but leaves the concrete with noticeable injection holes that are 1”-2” in diameter. The material used in mud jacking is not waterproofed which could wash out if not properly sealed, but the material is extremely heavy. Knowing the weight of the original concrete, over a poor soil base, is usually what cause settlement in the first place and by adding additional weight you’re asking for additional settling to occur.

Long driveways, comes a lot of concrete to potentially replace. Typically, homeowners won’t replace the entire driveway do to the cost. More common they elect to fix the damaged areas. You can only imagine what, the end result looks like. Yes, a checkered board style driveway. The new concrete that was poured will never matched the original concrete, and usually stands out like a sore thumb. There are several variable which will control the color of the concrete. These include weather, finishing practices, the relative moisture content of the subgrade, the curing process, and the age of the original concrete. These factors are not always consistent. For instance, a cloudy day versus a hot sunny day pour can make the concrete turn out differently.

Even if you considered patching the problem areas, there are still problems that could exists. When concrete is poured there are two things that happens. It gets hard and it cracks. To control the cracking pattern, contractors will trowel or cut lines in the concrete to control the cracking pattern. These control joints will eventually crack through the slab. When it rains, this is a perfect path for water to flow down and under the concrete slab. Your long and narrow driveway accumulates a lot of water to travel down. This creates erosion and more wet, weak soil. When this happens, the soil shifts, and there becomes unsupported areas of concrete. Easy concept to think about is stepping in a mud. Now, imagine not only the weight of the concrete on the unsupported soil but driving a car on a driveway add tremendous added weight. If part of your concrete slab is supported in one section and not in others, the unsupported pieces may crack away from the other section which will result in additional cracks in the concrete or unlevel concrete.

PolyLevel is a state-of-the-art alternative to mudjacking, re-leveling grout or concrete replacement. PolyLevel is a high-density expanding foam that our technicians can use to raise settled concrete. The two-part polyurethane foam mixture is injected through small holes drilled in the settled concrete. Our installers are trained to control the injection process so that just enough foam is used to re-level the concrete deck and to fill additional voids under the concrete. Because the foam's expanding action fills voids in loose soil, this concrete leveling technique improves the soil's stability and load-bearing characteristics. You can feel confident that settlement won't occur again. Once the slabs have been lifted level, we can also come in and provide a silicone polyurethane sealant that will keep water from going through any joints and causing future erosion or a possible heave situations.

High capacity - Lifting action is a result of the expansion of the polymer, allowing for lifting of a much higher load than traditional mudjacking, which relies on hydraulic pressure being contained under a slab.

Waterproof - Polyurethane formula is fully waterproof, so it won't wash out, won't be impacted by freeze/thaw cycles and can be used to under-seal slabs and stop a variety of infrastructure leaks.

Quick cure time - Within just 15 minutes after injection, the concrete slab is ready for heavy loading; compared to conventional mudjacking which takes several days to cure.

Environmentally-friendly - With PolyLevel there's no need to demolish the concrete and transport the waste to a landfill.

The photos speak for themselves with this concrete driveway repair project in Lincoln, NE. After the concrete slabs were lifted and leveled back to their original position, we used NexusPro silicone-based caulking to seal the joints and cracks. The result not only looks great, but at a fraction of the cost of full replacement, this driveway is protected against future sinking and settlement problems. 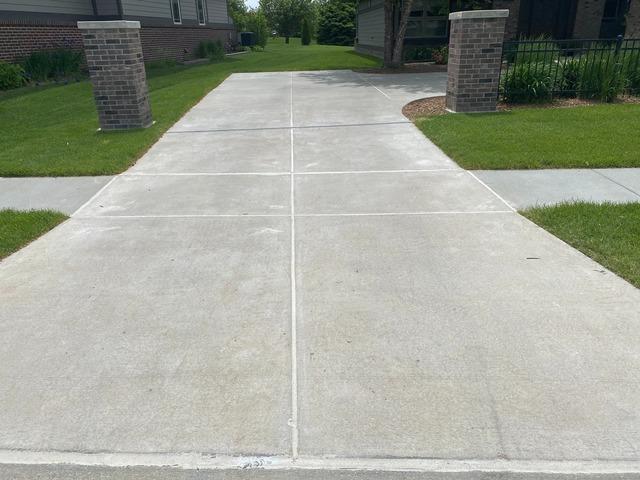 Homeowner Virginia N. wanted to prevent further damage to the concrete. She was noticing that certain areas of her driveway was starting to sink and crack. Wanting to maintain her home, she needed a concrete leveling company. She noticed that a neighbor’s concrete looked really nice and after hearing that Thrasher repaired it, she decided to give us a call.

System Design Specialist Sam Frei went out to Virginia’s home. He was able to see that the slab connected to the garage was sinking and beginning to crack. There were also quite a few cracks in the lower portion of the driveway that was caused by failed expansion joints from street creep. The crew used PolyLevel to fix the settled concrete slabs and NexusPo Joint Sealant to seal off the joints. We also installed CompressionGaurd to protect her driveway and home from street creep. Virginia was very happy to know her driveway and home were protected.

See All Before & After Images
Photo Galleries From Lancaster County 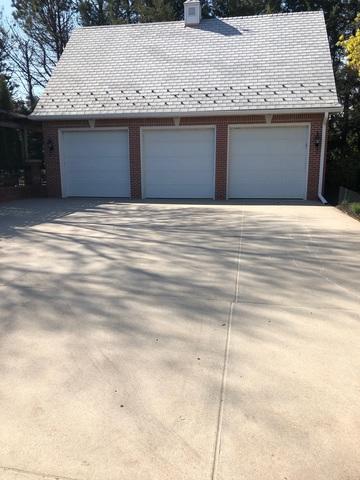 This is the driveway after all three products have been applied. The concrete is leveled, joints are filled, and the surface is protected. 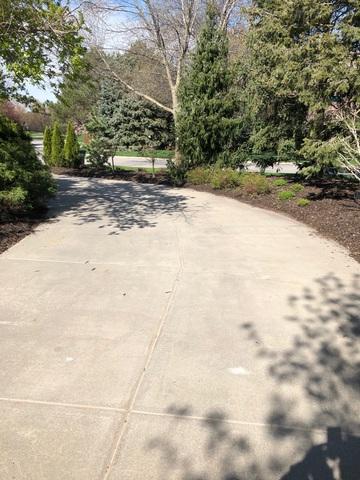 The gaps and cracks have been sealed using NexusPro filler. 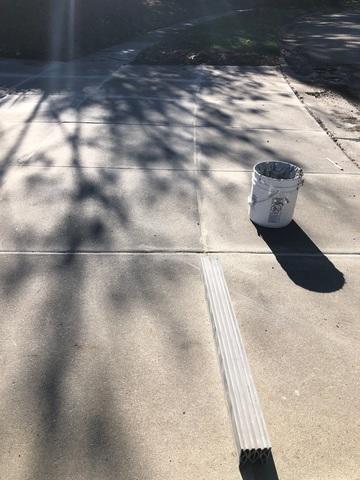 First part of the installation process of the compression guard. 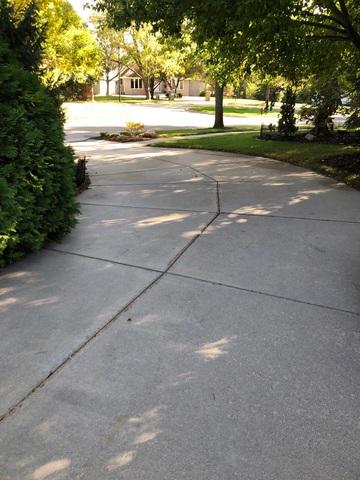 Large gaps in between slabs that allow water to seep in.