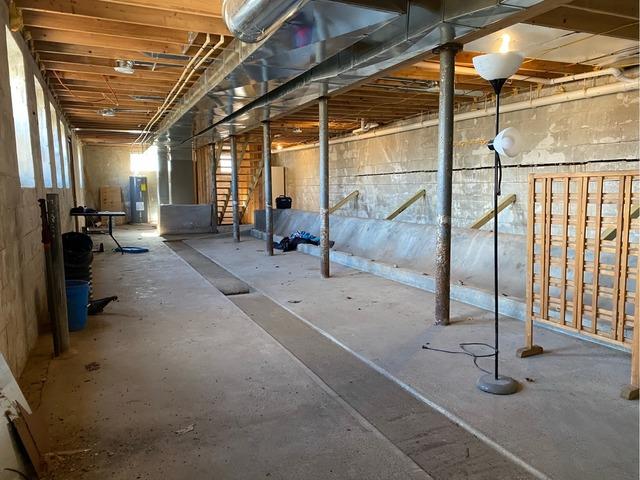 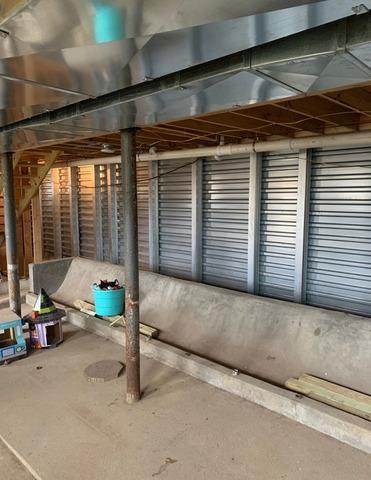 Nicole and Gabae recently bought a 75-year-old dairy barn that had been converted into a home. Unfortunately, this home had a bowing wall and a few water issues, common issues found in older homes. With plans to stay for the long-term, they knew they had to get it fixed sooner rather than later.

They had contacted another company, but their solution was invasive and involved removing the front porch altogether. Then they called Thrasher. We sent out System Design Specialist Eric Wulf to take a look at the problem.

Eric found that the wall was pushed inward 5 1/8 inches, the door above the area was sticking, and muddy water was entering the basement. He concluded that this was due to water weight, expanding soil, and the freeze/thaw cycle that caused the top of that foundation wall to move inward over a period of time.

Eric decided the best course of action was to use our EverBrace Wall Restoration System. EverBrace is used for extreme wall failure. It's less disruptive than total foundation replacement, but still just as effective. It uses steel corrugated panels and beams to strengthen and stabilize foundation walls.

Nicole and Gabae were so happy with the results and so happy they didn't have to compromise their front porch for a fixed foundation. 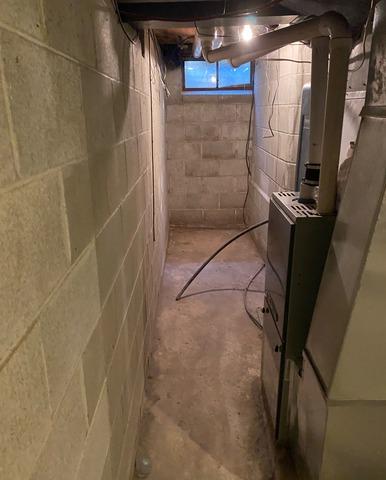 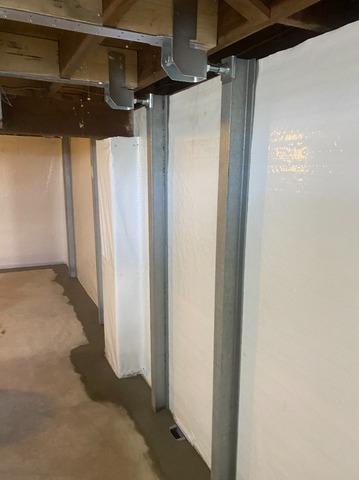 Brad T. is a homeowner in Nemaha, IA and was experiencing some issues with his foundation walls. The failing foundation was allowing water to seep in through the cracks and harming the living quality of the environment. The excess moisture was causing mold growth and a damp atmosphere in the basement. In search for a permanent solution, Brad gave Thrasher a call because of our reputation and excellent customer service.

System Design Specialist Jordan Comstock arrived at the home in Nemaha, IA to undergo a thorough inspection on the foundation walls. Jordan determined the walls were experiencing stage-two wall failure that was causing them to bow inward and allow water to infiltrate the space. In addition, water was also entering through the cold joints of a foundation add-on in the late 70’s. To combat these issues, Brad chose to have Thrasher install a combination of our waterproofing and foundation products. We began by applying our CleanSpace waterproof barrier to the full height of the foundation walls and a TripleSafe sump pump system to drain the water effectively. Then, our PowerBrace wall support system was installed to stabilize the bowing foundation.

Brad was thrilled to have his homes foundation issues repaired and a thing of the past. Thrasher was able to not only restore his foundation walls, but also his peace of mind knowing his basement is a safe place once again. 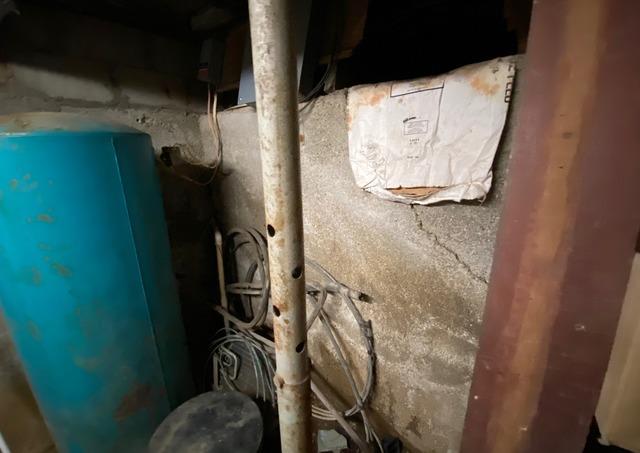 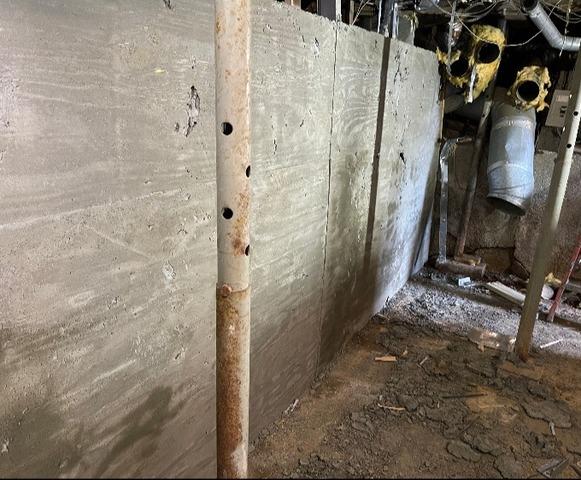 Jeff W. is a homeowner in Baxter Springs, KS but had recently purchased a new home making him want to sell his current one. However, before selling Jeff knew the foundation problems were going to have be taken care of. To find the best permanent solution, Jeff gave Thrasher a call to come inspect the failing foundation.

System Design Specialist Robert Griffin arrived in Baxter Springs to perform a thorough inspection in order to find the best solution. The interior wall that separated the crawl space from the cellar area had a two-inch sheer at the bottom and deflected enough the floor above it had dropped. To fix this, the team installed our PowerBrace support system and ShotLock wall restoration. The PowerBrace permanently stabilizes the foundation and can be tightened over time to return it to its vertical position. ShotLock is then used to seal all cracks to prevent water from seeping in.

Jeff was thrilled with the results of the solutions our team installed.  He was impressed with the quality and display of professionalism from the crew. He now has the confidence he needs to sell his home for maximum value. 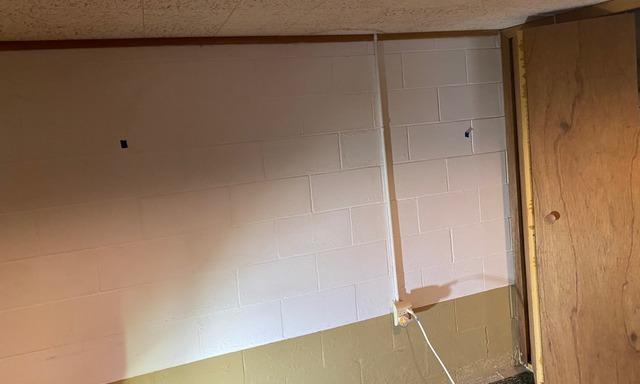 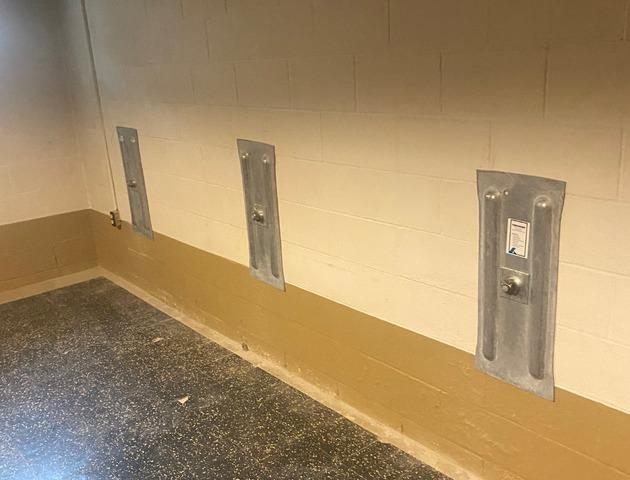 Homeowner Bob was worried about a foundation wall crack in his Storm Lake, IA home. Looking for a contractor to come out and look at the foundation walls, he decided to give Thrasher a call. System Design Specialist Corey Little went out to Bob’s home.

During the inspection, Corey identified that the wall was in stage 2 of wall failure. Bob noticed that the crack was getting larger because the wall lacked proper support to stop it from moving. The crew installed Geo-Lock Anchors to stabilize the wall. Bob was happy with how the anchors turned out. 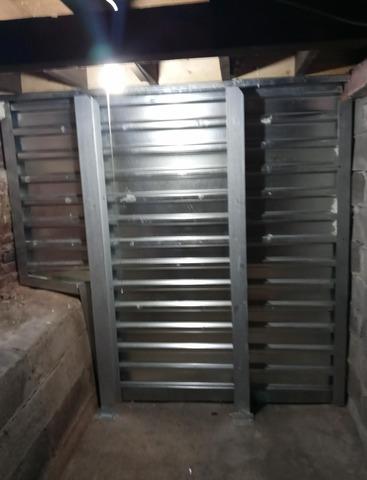 This home in Schaller, Iowa was in real danger of foundation collapse as the brick walls of the basement deteriorated and deflected inward - a sign that water pressure from saturated soil around the homes foundation had been building up for awhile. To prevent a catastrophic foundation event and return safety and stability to the home, we installed out new EverBrace wall support system. The customer was thrilled and relieved to have the problem fixed!